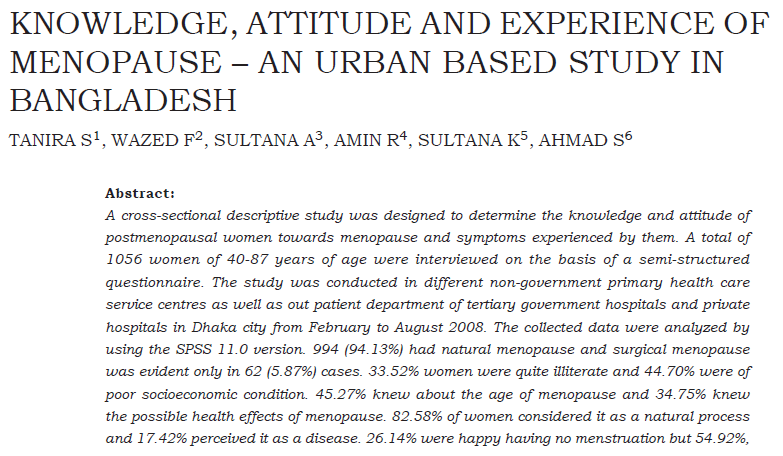 KNOWLEDGE, ATTITUDE AND EXPERIENCE OF MENOPAUSE

A cross-sectional descriptive study was designed to determine the knowledge and attitude of postmenopausal women towards menopause and symptoms experienced by them. A total of 1056 women of 40-87 years of age were interviewed on the basis of a semi-structured questionnaire. The study was conducted in different non-government primary health care service centres as well as out patient department of tertiary government hospitals and private hospitals in Dhaka city from February to August 2008. The collected data were analyzed by using the SPSS 11.0 version. 994 (94.13%) had natural menopause and surgical menopause was evident only in 62 (5.87%) cases. 33.52% women were quite illiterate and 44.70% were of poor socioeconomic condition. 45.27% knew about the age of menopause and 34.75% knew the possible health effects of menopause. 82.58% of women considered it as a natural process and 17.42% perceived it as a disease. 26.14% were happy having no menstruation but 54.92%, being unhappy, wanted to have menses again and 18.94% had no opinion. Most common physical symptoms reported were backache (82.77%), bodyache (65.25%), insomnia (45.27%), vasomotor symptoms like hot flushes (36.84%) and night sweats (32.39%) and frequent mental symptoms were mood changes (34.85%), loss of memory (19.70%) and depression (19.51%). 32.47% were bothered by those symptoms but only 18.23% consult the physician. Only 3.67% were taking HRT. The overall scenario is frustrating, though the people were from a more facilitated environment of a mega city like Dhaka, and that may be due to low literacy rate and poverty.