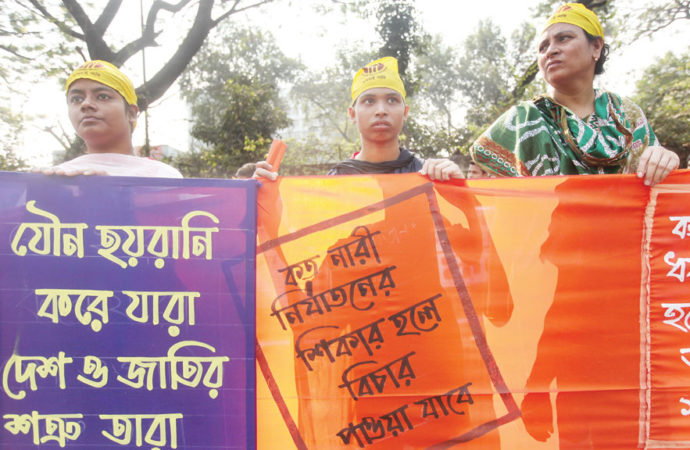 Non-government organisations and human rights organisation observed the International Protest Day against Repression of Women on Nov 25 with befitting manner, but violence against women and children is going on due to proper implication of existing laws.

To mark the day, different human rights organisations and NGOs of Khulna organised human chains, discussion meetings and seminars in the city protesting repression against women, as Khunla has seen an increase in violence against women like many other districts in Bangladesh.

According to information from monthly reports of Khunla law enforcers, a total of 226 women were tortured from January to October 2016 in Khulna. About 50 were raped and 23 were trafficked.

On average, a total of 22 women and children were tortured in every month where five were raped and two were trafficked, said the report.

Among the victims, 103 women tormented in last 10 months in Khulna city and 20 were violated and 11 were trafficked. On the other hand, 123 were tortured, 30 were raped and 12 were trafficked in nine upazilas in the district.

Md Mominul Islam, coordinator of Human rights implementation organisation, Khulna, said: “Due to oppose of different religious fundamental organisations, government could not imply Convention on the Elimination of all Forms of Discrimination Against Women (CEDAW). If we can imply it, violation against women would be decreased significantly.”