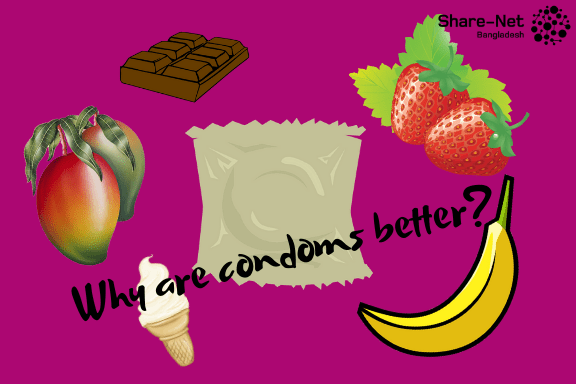 According to an article by Dhaka Tribune, men have been lagging behind in using birth control, especially condoms. Instead, they pass on the responsibility of using contraception on to their partners.

It is a common belief that the use of condoms will result in a loss of their sex drive and won’t give a complete pleasurable experience. This is one of the main causes which leads to unwanted pregnancies and transmission of STDs, the burden of which later has to be borne by women.

What does a condom do?

A condom creates a thin physical barrier that obstructs semen from going inside the vagina. This makes sure fertilisation does not occur. Planned Parenthood says that condoms are 98% effective against pregnancy. As a condom prevents the exchange of any kind of fluids between partners, it provides protection against STIs and STDs.

Contrary to popular belief, there are plenty of reasons how a condom can help you have a more pleasurable sexual experience. There are condoms now designed to add more stimulation, and to appeal to the senses of taste and smell.

What can go wrong?

Watch this video to learn how to wear a condom: https://www.youtube.com/watch?v=EdSq2HB7jqU

How can I get a condom?

It is no surprise that for many people, especially young people, it becomes very difficult to buy condoms over the counter. In this research, Anika Binte Habib writes about the challenges faced by urban youth in Dhaka for access to contraceptives.

Apart from medical pharmacies, you can find condoms in large departmental stores where can just pick your product and pay at the cash counter. If you are still uncomfortable with that, you can order online. Online pages on Facebook or e-commerce sites like Daraz and Chaldal sells these items which you can have delivered to your home, workplace or any other place which you find comfortable.