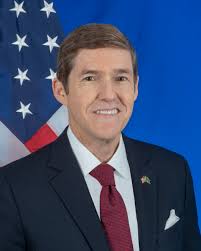 Transgender People Facing Hatred All Over the World: Earl Miller

US Ambassador to Dhaka Earl R Miller yesterday said transgender communities around the world are facing violence and hatred, and their gender identity is rarely respected.

Speaking at a book launch at Dhaka University’s Muzaffar Ahmed Chowdhury Auditorium, he urged the youth of the country to come forward to unite the world — which is divided by race, religion, and gender.

Zobaida Nasreen’s “Narratives of Gender Diverse People”, a book that underscores the struggles faced by transgender people, was launched at the event, organised jointly by DU anthropology department and The American Center in the capital.

Nasreen Ahmad said the transgender community must be given the opportunity to find gainful employment, so that they can contribute to the society and the nation.

She also hoped that in near future, DU will allow transgender people’s admission in the university.

Prof Sadeka Halim said transgenders often face discrimination in soeicty, as many people have a lack of understanding on the issue.

She emphasised on concerted efforts to realise the rights of transgender people.

Speaking at the event, Joya Sikder — a transgender person — said that although the state has officially recognised the third gender, they still remain deprived of many basic rights, and employment opportunities.

The book was published by Srabon Prokashoni.

Zobaida Nasreen is an associate professor of anthropology at DU.

Her previous research work has focused on ethnic and religious minorities, gender and sexuality, and more.