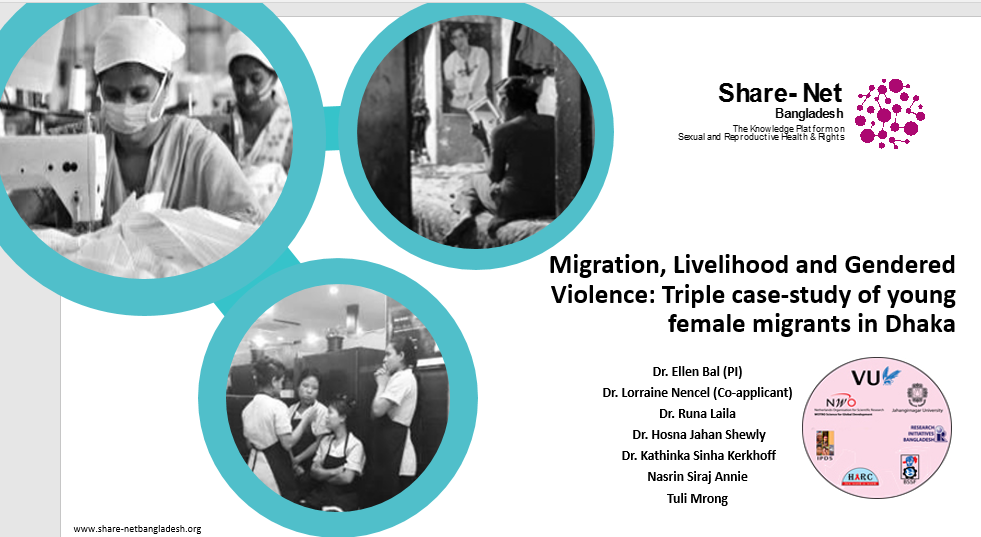 Migration, livelihood and Gender based violence: A triple case-study of young female migrants in Dhaka

Over the past two decades, Bangladesh has experienced a rapid transformation in terms of rural-urban labour migration of young female. Young Female Migrants (YFMs) old social networks and social capital no long offer forms of protection in their new urban living arrangements. In this context, this paper addresses the experiences of gender based violence among three groups of highly vulnerable YFMs in Dhaka: i) garment workers, ii) Garo beauty parlour workers, and iii) hotel and residence based sex workers.

This is a multimethod research, including ethnography, Participatory action research and interview,  conducted by a multi-national group of researchers in partnership with a Dutch University, local NGO’s and a  Bangladeshi university between March 2016-September 2018.

Women’s experience of GBV can be summarized in the following interrelated themes:

There are specific ways GBV manifest among different groups of women.  Various forms of GBV are rooted in gender and power inequalities that exist in various institutions in the society- family, culture, economy, work place and political structure.

At the family level prescriptive feminine persona as dependent, passive and submissive, made women silent victim of domestic violence and coerced sexual intercourse. FSWs, accept violent partner to keep their ‘good women’ identity. The precariousness of sexual rights among Garos prevent them reject any sexual intercourse from their ‘lover’, ‘boy-friend’ or ‘fiancé’, who tend to enjoy full sexual freedom in the society.

At workplace women’s experience of unwanted sexual comments or sexual harassment by male co-workers, were due to their gender and power hierarchy. Due to prescriptive notion of female sexuality, FSWs are being socially stigmatized as ‘fallen women’, justifying structural violence by mastans and police.

GBV needs to be addressed from basic human rights perspective. Efforts to reduce GBV require long term intervention at all levels of the society.  It implies addressing the immediate needs of different groups of women, to promote long term social and cultural transformation towards gender equality. It needs including the voices of marginal Garo beauty parlour workers, sex workers and garment workers in the public discourses and provision of SRH care services without discrimination.