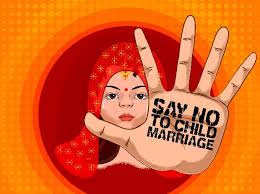 A 15 years old girl  has stopped her marriage at Dhunot Upazilla, Bogura. The brave girl has threatened  to commit suicide and later the marriage is stopped with the intervention of the administration.

The girl has lost her father 13 years ago and her mother has raised her alone. One of her cousins has sent marriage proposal two years back. The boy’s family has forcibly arranged the marriage in spite of the denial of girl’s family. When the groom’s party has arrived at the girl’s place, she locked her door and threatened to commit suicide. While the groom has been trying enter her room, the other members of the family informed Upazilla admistration.

Razia Sultana, Upazilla nirbahi officer and Mizanur Rahman, police officer have rescued the girl and taken her to the supervision. The mother put  a file against the groom yesterday. Later, the groom’s mother is arrested and sent to the jail.

The groom’s mother has claimed that  the marriage ended because of mischief local people.

The girl has complained that she has been  harassed by the  boy for the last two years. Finding no other option, she has threatened to commit suicide. The girl’s mother has said that she hasn’t given consent for the marriage.

‘With the assistance of the thana administration, I have rescued the girl and taken legal step against them’ said Razia Sultana.