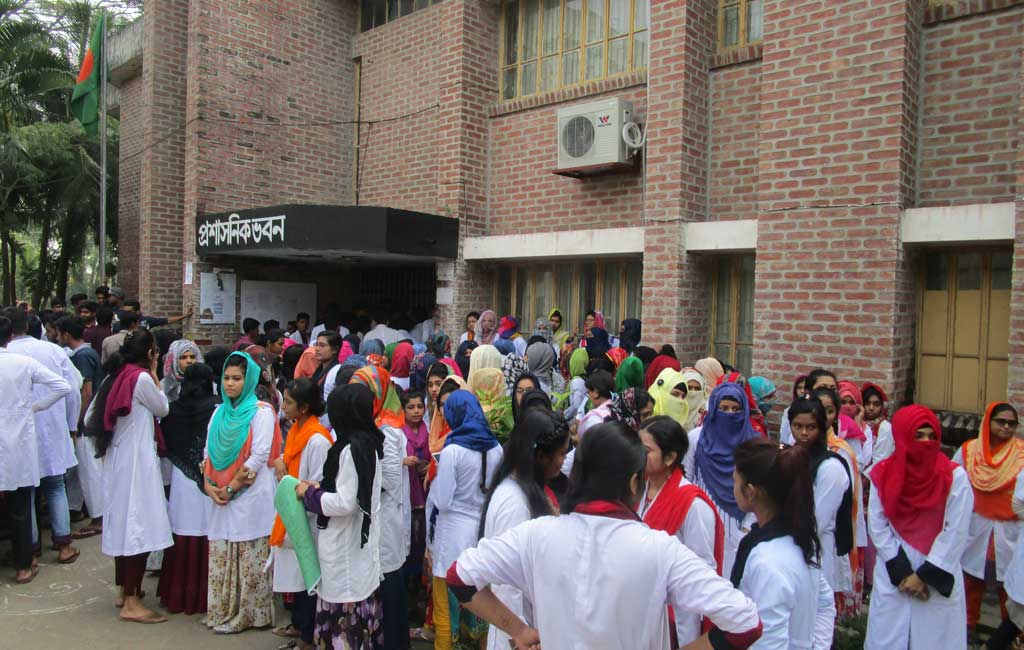 In the face of students’ protest, principal says further action will be taken after investigation

The authorities of Bagerhat Medical Assistants’ Training School (MATS) have removed four staffers from campus after students brought sexual harassment allegations against them.

The move came on Tuesday, a day after the students started protesting on campus in the town’s Muniganj area — pushing a six-point charter of demands.

“We have formed a four-member committee to investigate the allegations of sexual harassment of female students. The committee has been asked to submit its findings within 48 hours [by Wednesday],” he said.

“Further action will be taken against them based on the probe report,” added the principal.

After the MATS authority’s step against the four and assurance of meeting their demands, the students also called off their protest around 2:30pm on Tuesday, confirmed their spokesperson second-year student Jahid Hasan.

The students had started agitating in front of the academic and administrative buildings on Monday evening, in protest against alleged sexual harassment of female students by five MATS employees and demanding sacking and punishment of the five.

The fifth MATS employee is night guard Abdul Hamid. He is yet to face any action.

As the protest continued late on Monday night after students vandalized furniture inside the administrative building, police were also deployed on campus at one point to maintain order.

The students’ demands also include embargo on male MATS staffers entering female student dormitory without the principal’s permission, stopping teachers from using lower level staff on examination hall guard duty, an end to staff’s harassment of and threats to students, and ban on extortion and entry of outsiders on campus.

Many of the agitating students told Dhaka Tribune that a number of MATS staff have been harassing them in different ways for a long time — including verbally abusing them and threatening to fail them in practical tests if students do not follow their directives.

Female students alleged the five accused staffers used to enter their dormitory and rooms without any notice or warning. They also made lewd comments and sexual advances on several occasions.

Principal Dr Rakib said the students did not file any complaints regarding these issues in the past. “But they have filed a written complaint now. We are investigating. We will work to meet all the students’ logical demands.”

But the students alleged that the staffers did not allow them to enter the principal’s room on different instances when they went to file complaints.