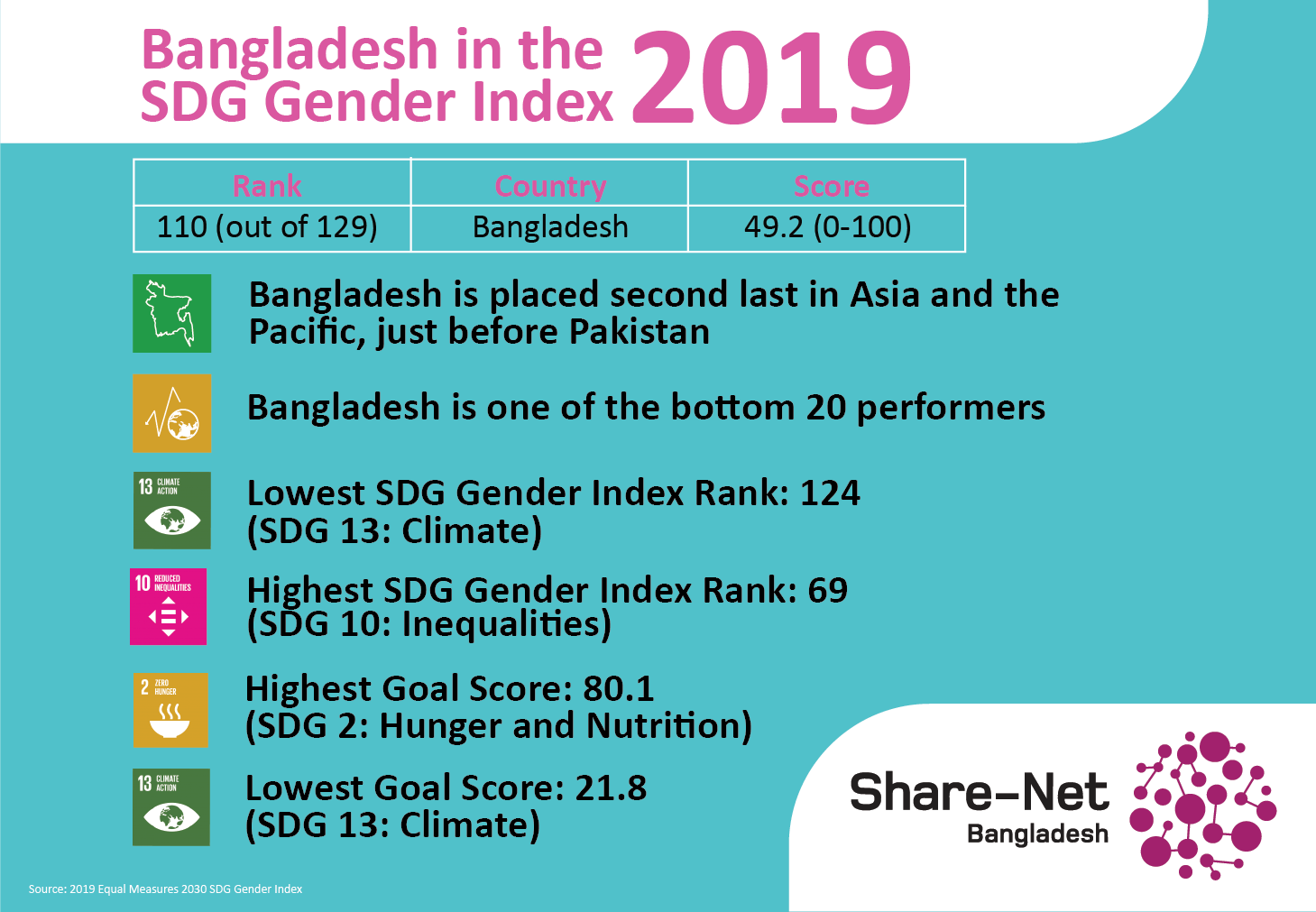 Bangladesh in the SDG Gender Index 2019

Data plays an important role in driving policies, laws and budget decisions in order to meet existing commitments made by governments in the Sustainable Development Goals (SDGs) to achieve gender equality. Realising this importance, Equal Measures 2030 made a report titled ‘Harnessing the Power of Data for Gender Equality’ to ensure that girls’ and womens’ movements, advocates and champions have the data that they need.

The SDG Gender Index includes 51 indicators across 14 of the 17 SDGs and covers 129 countries. These 14 Sustainable Development Goals have a direct or indirect impact on gender equality and gender issues. For example:

The United Nations made a target to reach each of the SDGs by 2030. With just 11 years to go until 2030, nearly 40% of the world’s women and girls, 1.4 billion, live in countries failing in gender equality. The report states that across all the countries studied, no country has fully achieved the promise of gender equality. No country has scored 90 or above. Denmark has topped the list with a score of 89.3, yet cannot be labelled as ‘world’s best performer’. Other countries in the top ten are Finland, Sweden, Norway, Netherlands, Slovenia, Germany, Canada, Ireland, and Australia. Chad is placed at the bottom of the list with a score of 33.4. Other countries at the bottom ten are DR Congo, Congo, Yemen, Niger, Mauritania, Mali, Nigeria and Liberia. All these countries happen to be facing extreme poverty and fragility. The report says that the high scoring countries still have a lot to do in complex issues such as climate change, gender budgeting and public services.

Bangladesh is placed at 129 with a score of 49.2. Any score below 60 means that the condition of gender equality in that country is ‘very poor’. It is one of the bottom 20 countries in the world and the second last country in the list from Asia and the Pacific, just before Pakistan.

Out of all the goals, Bangladesh scored the highest in SDG 2: Hunger and Nutrition, with an indicator score of 80.1 and global ranking of 70 in the list. Some of the main causes behind hunger is crisis and inflation. In these situations, poor women are the ones most affected which leads to malnourishment and under-nutrition. In most cases, malnourished women are unable to contribute to any kind of activities. Malnourished women are at the risk of giving birth to underweight babies or babies with stunted growth. Underweight children are 20% more likely to die before the age of five. The score of 60.4 in the issue of ‘prevalence of anemia amongst non pregnant women (15-49 years) show that Bangladesh has a long way to go to ensure proper nutrition among all women. Bangladesh’s highest rank is 69, which is in SDG 10: Inequalities.

Bangladesh has done well in SDG 2, which is the goal of eradicating hunger and ensuring nutrition for all. However, Bangladesh hasn’t reached any rank above 69. Bangladesh is ranked above 100 in 6 goals, and has a ‘very poor’ score in 7 goals. Thus, it can be concluded that Bangladesh has a long way to go to achieve gender equality based on the Sustainable Development Goals by the year 2030.