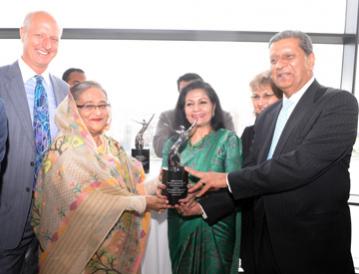 The Prime Minister (PM) of Bangladesh, Sheikh Hasina, has received worldwide approbation for her outstanding contributions to women empowerment.

On Thursday, September 22, the Prime Minister was acknowledged with “Agent of Change” award by the Global Partnership Forum, alongside her recognition as “Planet 50-50 Champion” by the UN-Women at New York’s UN Headquarters.

Upon receiving the honours, the PM expressed her gratitude to the awarding organizations and shared her vision where women will be working equally with men, and dedicated the awards to the people of Bangladesh. She also remembered her father, Sheikh Mujibur Rahman, who is the father of the nation, for raising her with that vision.

Bangladesh has succeeded remarkably in meeting the Millenium Development Goals (MDGs) of alleviating poverty, improving gender parity in education, and reducing infant and maternal mortality among others. She also expressed her gratefulness to Bangladeshis for giving solid proof of the country’s commitment, and reaffirmed the implementation of the Sustainable Development Goals (SDGs) to be carried out, with gender equality at the core.