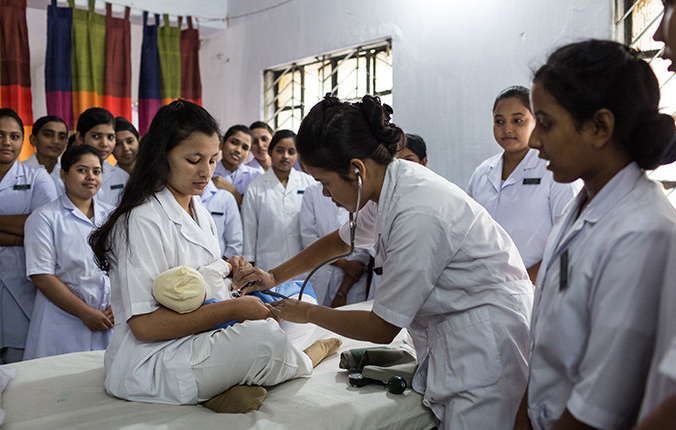 Bangladesh is on track to tackle the lack of trained midwives in the country. The government successfully created 3000 midwifery posts and three-year diploma courses in 31 medical and nursing colleges throughout Bangladesh. UNFPA openly applauded the government for this achievement.

The majority of births in Bangladesh are not attended by a trained health care provider, such as a midwife or a nurse. Bangladesh is still one of the 73 countries that account for over 90% of all stillbirths, maternal and newborn deaths in the world, according to the United Nations Population Fund (UNFPA) in 2014.

The Government of Bangladesh (GoB), World Health Organization (WHO) and UNFPA had been working together to prepare the midwifery workforce for Bangladesh. A 6-month advanced midwifery certificate course has been running since 2010. The joint initiative also launched a 3-year direct entry diploma in midwifery in December 2012. Lastly, it is working to ensure experienced midwives can train other midwives. In short, the aim is to introduce international standard midwifery services in Bangladesh.

The midwifery courses delivered 1100 trained nurse-midwives last year, and more than 1200 candidates, enrolled for their diploma in midwifery, are to graduate this year.

The UNFPA has defined ‘Midwife’ as a person who has been educated in midwifery education program recognized in his/her country as well as by international standards. The role of a midwife is essentially to take care of women during pregnancy, labor and postpartum period and also the newborn and infant.

According to the UNFPA in 2014, four factors – Availability, Accessibility, Acceptability, and Quality of the midwifery workforce- are essential to ensure safe delivery and childbirth. These factors were seriously lacking progress; the midwives who had completed training could not get into practicing since there were not enough job positions available; this meant the midwives were in the risk of forgetting whatever they have learnt in their training due to lack practice. The creation of 3000 new midwifery posts will hopefully solve this issue.

Maternal mortality has already decreased dramatically; in the past 13 years the number of mothers dying in childbirth has been halved, according to statistics by the World Health Organization (WHO). What is needed now, as suggested by UNFPA, is to ensure quality training, good workforce strategy, policies for midwives, and the institutionalization of midwifery-led Maternal and newborn care.

Dr Khaled Hassan, WHO Acting Representative to Bangladesh expressed hope that “These new midwives are going to play a crucial role in improving the advice and care given to women during pregnancy, birth and postpartum, and it is vital they are deployed where they can have maximum effect” (Quoted in WHO website in 2014).