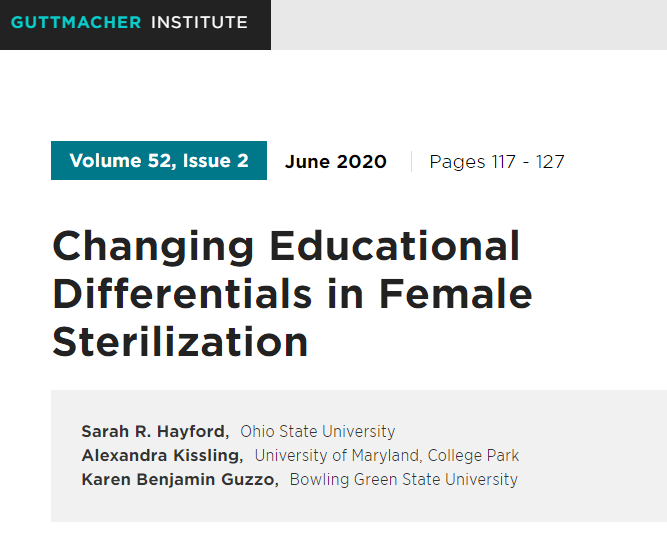 Female surgical sterilization is widely used in the United States. Educational differentials in sterilization are large, but poorly understood. Improved understanding of these differences is important to ensure that all women have access to the full range of contraceptive methods.

Data from the National Survey of Family Growth (1973–2015) from 8,100 women aged 40–44 were used to describe trends in sterilization and other contraceptive methods by educational attainment. Demographic standardization was employed to examine how compositional changes in marital status and age at first birth contribute to aggregate changes in sterilization prevalence.

In 1982, women with a high school diploma and those with at least a bachelor’s degree reported similar levels of sterilization use (38% and 32%, respectively), but by 2011–2015, prevalence had declined to 19% among college‐educated women and had increased to 44% among those with a diploma. The trend among college graduates was largely attributable to delayed fertility; all other things being equal, if their age at first birth had not increased, the prevalence of sterilization would have declined by approximately 3% instead of 14% between 1982 and 2002. Increased use of sterilization among women with a high school diploma was only weakly related to changes in birth timing and marital status.

Among women with a high school diploma, elements other than childbearing and marital status—such as contraceptive preferences and access—appeared to influence their contraceptive behavior. Sterilization differentials between high school and college graduates may reflect or exacerbate other socioeconomic disparities that affect women’s health and well‐being.