Rabeya Khatun, 25, a homemaker in Kawkhali village of Rangabali upazila, Patuakhali district, has not had a child since she got married eight years ago.

Talking to this correspondent of the Daily Observer, who recently paid a visit to the Barguna and Patuakhali districts, in the southern part of Bangladesh to investigate the current health problems of coastal women due to the impact of climate change, she said that her conjugal life was turning chaotic due to this.

The situation of Shamima Akhtar, 24, a labourer in Naltona upazila (sub district), Garjanbunia village, (sadar upazila) in coastal Barguna district is no different. She is now under treatment for infertility problems. 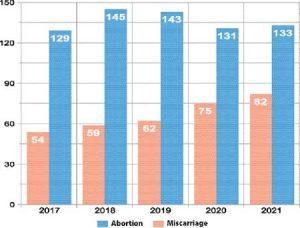 Many women and girls in this part of Bangladesh are not only suffering from infertility problems, but also from uterine infections.

Some must have hysterectomy (removal of the uterus) to save their lives and this type of surgery is leading to complications in their married lives.

Between 2012 and 2017, the icddr,b scientists registered 12,867 pregnancies in the coastal area and they found that women, living within 20 km of the coastline and 7m above sea level were 1.3 times more likely to miscarry and face other health hazards than women who live inland.

This, scientists believe, is to do with the amount of salt in the water the women drink, – the increase of which is caused by climate change.

From agricultural lands to ponds, canals to rivers, all are getting contaminated with saline water. 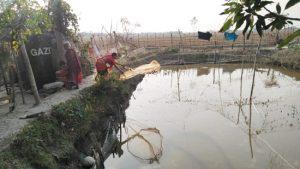 A woman catches fish from an extremely saline fish farm which is located in Baherchar village of Patuakhali district.

Another recent study conducted by the World Bank suggests that climate change has caused huge soil salinisation in coastal Bangladesh including areas of Barishal, Chattogram, Khulna, Satkhira and other districts.

The study also suggests that this situation will likely lead to shortages of drinking and irrigation water and causes changes in aquatic ecosystems due to saline water contamination in the water bodies.

However, no one knows with certainty the cause behind the sudden surge in uterus infections since no concrete research study has been conducted yet.

Women not only drink the saline water, they bathe in it, use it for household chores and spend long hours in the water fishing or trawling for shrimp fry which they sell.

Residents of Mohipur village in Kalapara upazila of Patuakhali district, Sharifa Begum, 24, a labourer and Hanufa, 21, a domestic help, both had to undergo a hysterectomy.

“My husband abandoned me and re-married following the surgery,” said Sharifa, mother of a three year-old daughter.
Talking to Daily Observer, elderly residents of the area said this alarming health hazard was unprecedented.

“We guess the health disaster situation is somehow linked to drastic climate change here. We have not witnessed such extreme weather conditions even two decades ago and did not encounter such health problems,” said Bhanu Moti, 85.

Champa Begum, 27, a homemaker who lives in Hagipur village of Kalapara Upazila in Patuakhali, is also suffering.

“My lower abdomen hurts a lot and sometimes my waist becomes numb,” she said.

“There is a severe white discharge and frequent itching, and sometimes even difficulty to urinate,” she added. 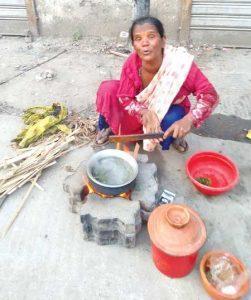 Rashida Begum, a homeless woman from Mohipur Village, in Kalapara Upazila in Patuakhali district (in southern part of Bangladesh), is seen cooking just besides capital’s Shapla Chattar, who was thrown out by her husband after her uterus removal. Later she migrated to the city for her livelihood.
PHOTO: OBSERVER

However, analysis of data of three private clinics in Patuakhali, shows that doctors of these clinics carried out numerous hysterectomies over the last eight years.

Dr Tapos Roy, who works at a private clinic in Patuakhali, said that in 2020, at least 12 hysterectomies were conducted at the clinic.

Dr Shorab Hossain and Dr Fatema Islam, both practicing in private clinics in Patuakhali, said they were now receiving many female patients.

Lelin Choudhury, health expert, said that the main reason behind such health problems is the proximity to salinity which is a direct effect of climate change.

“Women’s reproductive health in many of the char (shoal) and coastal areas of Bangladesh is in jeopardy because of their proximity to toxic salty water. Useful Bifido bacteria get killed and harmful pathogenic bacteria infect sensitive parts including the uterus: this ultimately leads to miscarriage and infertility,” Choudhury added.

Dr Jahangir Alam, the Civil Surgeon of Patuakhali, said that they were closely monitoring this trend in infertility among women and suspect extreme salinity in water is the cause.

“We cannot conclude unless research work is conducted. But the situation is alarming. Therefore, we have decided to conduct research work under Climate Change Vulnerable Assessment Project in three Upazilas of Patuakhali, Kalapara, Rangabali and Galachapa – under a pilot project,” he observed. 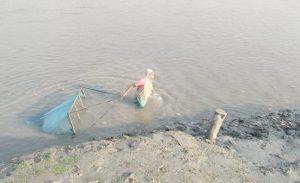 A woman catches fish fry from the Agunmukho River in Patuakhali district.

Alam does not rule out a positive correlation between climate change and the alarming rate of infertility in these areas.

“We have conducted several workshops with different stakeholders including local people, doctors, local bodies and they all concluded that there is a link between climate change and extreme salinity that leads to various health hazards,” he added.

“These are assumptions. They’re not adequate to prove conclusively such unprecedented health hazards. We need scientific evidence.”

An acute shortage of skilled personnel in hospitals compounds the problem, he added.

“Cases of abortion and miscarriages continue unabated and complicate these infertility cases,” he said.

“We need more time to deal with cases of infertility. We have also attended a good number of cases of abortion and miscarriage-related problems. So, I prefer to advise them to visit my own clinic so that I can handle them closely,” she said.

Records at her clinic show that at least 4-5 women visit her clinic every day with complaints of infertility.

“The number is increasing,” she says.

Siddiquah underscored the seriousness of a spike in abortion and miscarriage cases rather than a focus on infertility alone.

“Such a scenario was unimaginable merely a decade ago,” she lamented.

Climate change at the root?

Experts say there is evidence to show a relationship between climate change and the Sexual and Reproductive Health Rights (SRHR) of marginalised Bangladeshis.

Share-Net Bangladesh (a knowledge platform on SRHR), recently conducted a study titled “How do women’s experiences with climate change impact their sexual and reproductive health decision-making behaviour, and outcomes in Bangladesh”.

The study report shows marginal women and girls from coastal regions like Dacop Upazila in Khulna district are unable to maintain their SRHR management because of extreme salinity.

“Extreme salinity discourages them from using water for their SRHR purposes; that causes other health problems,” said Dipika Paul, one of the researchers.

The extent of health problems is further illustrated by a study entitled “Distribution of Ground Water Salinity and its Seasonal Variability in the Coastal Aquifers of the Bengal Delta”.

It suggests that the salinity of groundwater rose to beyond-tolerable levels in most coastal areas in the last two decades.

Ayesha Taasin Khan, Senior officer of Friendship, (a non-government organisation or NGO), said they are generating union and upazila level data through their projects on climate induced SRHR challenges which they are willing to share for big scale government programmes.

She wanted the government to start a databank, especially in coastal areas, to collect information about the scenario with the help of NGOs. The agricultural lands have become barren and as no vegetation is seen near any human habitation in southern and western coastal areas of Bangladesh.

The agricultural lands have become barren and as no vegetation is seen near any human habitation in southern and western coastal areas of Bangladesh.

“We can get information by generating a data bank in every union and upazila level in the respective area to know if really salinity is responsible for these health hazards,” she said.

Md Mostafa Kamal, Secretary of the Ministry of Environment and Climate Change said that the ministry is aware of the issue and planning to conduct research work very soon.

“When climatic change negatively impacts environment, it will also impact on the health of people; this is inevitable,” said Ainun Nishat, a popular climate expert.

“It breaks the system of the whole ecology of a certain environment, and we humans are part of this ecology. The whole eco system including the mangrove forest has come under threat in the whole coastal belt and human-inhabited area due to this extreme salinity,” he said.

Asked what measures could be taken to address this issue, biodiversity expert Pavel Partha said a holistic approach is needed to protect ecology and biodiversity that would positively impact environment including human health.

Referring to a recent “Climate Afflictions Report” by the World Bank, Partha said that Bangladesh’s average temperature has increased by 0.5 degrees Celsius over the past 44 years.

Overall temperature has drastically changed between 1976 and 2019 and the country is slowly losing the variations between seasons.

“Such change will definitely bring some changes in the whole ecology and biodiversity including impact on humans,” he said.