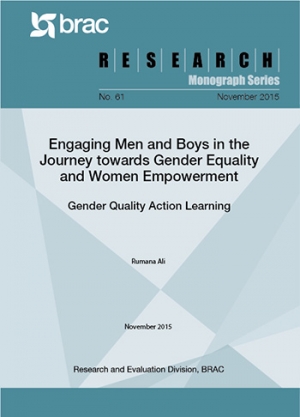 The objectives of the study were to explore the effects of GQAL (Gender Quality Action Learning) programme, initiated by the Gender Justice and Diversity programme of BRAC, on men in the areas of changing gender roles, shifting gender norms and reducing VAW (violence against women) at household and community levels. Qualitative research methods were employed to achieve the objectives. Data collection techniques used in this study were: case studies and focus group discussions (FGDs).

After receiving GQAL messages, men’s engagement in reproductive activities and their role in ensuring their female family members’ participation in decision-making as well as their role in promoting women’s economic empowerment were investigated through case studies. Case studies were also conducted to explore men’s acts of protesting VAW both at family and community levels. Data were collected from two villages in Gobindoganj upazila, Gaibandha district: one village where there was programme intervention and another village where the programme had no intervention. The respondents from the intervention group received GQAL training during 2011 – May 2014. After intervention the respondents developed positive attitude and practice over sharing domestic activities, support to women’s rights in decision-making at the household level as well as enhancing women’s economic empowerment. They were also found active in protesting violence against women. The respondents worked in creating awareness on issues addressed by GQAL programme among their friends, relatives and neighbours in different ways. The attitude and practice of respondents in the intervention group distinctly different from respondents in the non-intervention group depict positive effects of the programme.