Life has turned bitter for a Santal woman since she was gang-rapped by some influential people in 2014, centring control over a land.

More than five years have already passed, but justice is still a far cry for the victim from Chapainawabganj, as law enforcers are yet to even arrest the alleged culprits, who continue to intimidate her.

“There is no justice in the country. How long do I have to wait for justice and face threats from my rapists? They are passing their lives freely, but my days have become miserable,” said the weeping woman in a programme at the Central Shaheed Minar yesterday. 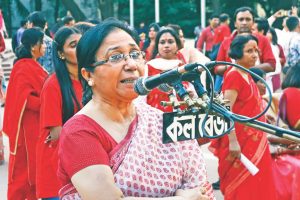 “Not only me, many others are facing such violence almost every day and waiting for justice for years,” she added.

A total of 19 non-government organisations — including Manusher Jonno Foundation (MJF), Ain o Salish Kendra (ASK), Naripokkho and ActionAid — held the event to mark the International Day for Elimination of Violence against Women, observed on November 25.

Several thousand men, women and children took part in the rally — the biggest of its kind in recent times — carrying banners and placards containing different anti-violence messages. The theme of the event was “Let’s rise together against rape of women and children”.

Speaking at the event, rights activists demanded speedy trial for all forms of violence against women and children, including rape and sexual harassment, so that perpetrators cannot escape justice and are deterred from committing such crimes.

They also called upon women to raise their voice against torture, and asked the government to be more serious about incidents of violence immediately, as these have been on the rise in recent times.

MJF Executive Director Shaheen Anam said, “We organised this event to  awake people’s conscience. We don’t want to tolerate such gruesomeness  and brutal crimes anymore. If we all raise our voices, nobody will dare  commit such crimes.”

The noted rights activist also urged people from all walks of life to protest incidents of violence immediately when  they see those taking place.

Transparency International Bangladesh (TIB) Executive Director Iftekharuzzaman said violence against women is contradictory to the spirit of Liberation War and all the achievements of Bangladesh.

“As a man, I feel ashamed and sorry… I am concerned that violence is on the rise recently, but there is no remedy,” said Iftekharuzzaman, a noted anti-corruption campaigner.

To prevent such violence, laws should be applied properly by handing exemplary punishment to the culprits, he said, adding that the judicial procedure has to be completed timely.

He also urged the law enforcement agencies to play more active role in this regard.

Abdus  Salam, whose child was raped by one of his neighbours in  Dhaka’s Wari this year, said, “My seven-year-old daughter was murdered  after rape. She will never return. All I want now is exemplary  punishment of the murderer.”

He also urged parents to keep an eye on their daughters so that nobody falls victim to such crime.

Sheuli  Akter, a garment worker who faced sexual harassment  recently, said she had to leave her job due to continuous mental harassment  and untoward advances from one of her bosses.

“Nobody will  understand the suffering I had been going through. I wish,  not a single woman has to face such a situation,” she added.

Over 300 events were held nationwide yesterday, marking the occasion.

According to a recent report by ASK, at least 1,253 women were raped  and 221 became victims of sexual harassment from January to October this  year. Of the rape victims, some 251 were gang-raped and 62 were  murdered after rape. Another report, prepared by MJF, found that  at least 767 children were raped and 106 were sexually harassed during  the time.

Both reports were prepared based in news published on national dailies.