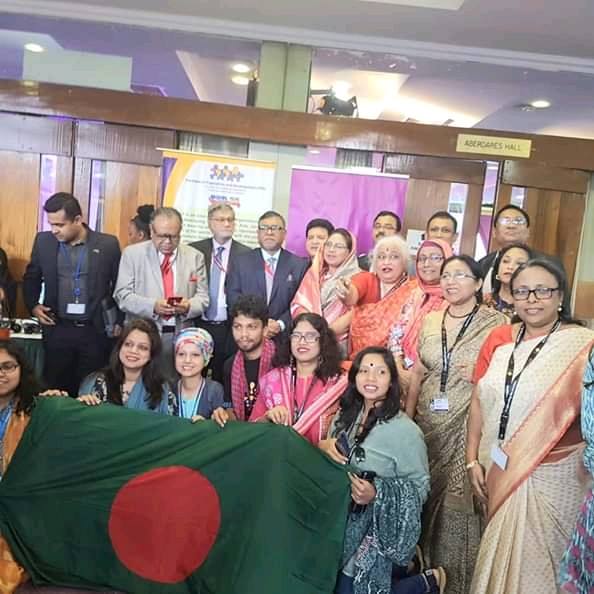 Experience from ICPD25 : Call for Planetary justice and Climate Equity, Reproductive Justice too!

We all know that the fight against climate crisis is a major concern which involves the entire planet. Climate change does not respect national borders; it is a global challenge that needs to be coordinated at an international level. I attended a high-level session on “Climate Change Adaptation and Justice” especially regarding Small Island Developing States (SIDS). The Nairobi summit was unique in the sense that it brought together national leaders and young climate change activists to discuss the negative effects of climate change on entire populations and the impact of extreme weather conditions, rising sea levels, desertification, floods, drought, and shifting wildlife and habitats on the environment and people.
Mitigation and adaptation efforts are progressing too slowly for government’s inaction. In many least developed or developing countries, such as Bangladesh, the fight against climate crisis also includes the fight against poverty and the protection of the environment, as well as other issues related to sustainable development.

Bangladeshi people are “innocent victims” of climate change in all aspects, as the country compared to the developed ones, has almost no contribution to the cause. Per capita carbon dioxide (CO2) emission in Bangladesh is 0.46 tonne per year. On the other hand, in developed countries, the carbon emission is about 10 to 15 tonnes per year. Researchers from different institutions have noticed a higher rate of salinity induced miscarriage and altered blood pressure level in coastal Bangladesh.

It is observed that the social and political context for women in Bangladesh, such as socio‐ cultural norms and limited access of women to decision‐making increases their exposure and vulnerability to climate change, especially during, and post climate change related disasters. Insecure environments in cyclone/flood shelters including overcrowded spaces and lack of privacy exist and there is occurrence of gender‐based violence. This conference has emphasized on the meaningful participation of young people towards all kinds of decision-making levels as present leaders. There should be a strong and active involvement of vulnerable communities, especially the young women & men, in policy making and formulation of the strategies in field of climate change adaptation.

On the other hand, gendered impact of climate crisis is substantial during and after disasters. Women and girls are especially vulnerable due to lack of access to medical care, contraception, services, privacy, security and safety, as well as hygiene products such as sanitary napkins. All these issues are fully linked to the social and economic empowerment of women, and empowerment of women has important consequences on SRHR. We need more Adaptation Fund financed projects and programmes to help vulnerable women and young people get access to quality sexual and reproductive health services. National governments should mobilize special budget allocation for building coastal infrastructures including environment-friendly permanent embankments, women and children friendly cyclone shelters with SRH services and climate resilient urban infrastructures is must.

On the 2nd day of the Nairobi summit (13 November), Bangladesh made a good news that unanimously passed a motion declaring a “planetary emergency” and called on the world to work “on a war footing” to combat it and reduce its impacts.

While countries such as Britain, France, Canada, Portugal, and Argentina have declared climate emergencies, the Bangladesh parliament is the first to declare a “planetary emergency.” The declaration also makes Bangladesh the first among developing countries to issue such an alert and call for action. This declaration also recognized our youth-led movements for demanding climate justice too. At a global level, our Governments must be enacting a strong international legally binding mechanism which will facilitate high carbon emitting countries to shift to a low carbon country.

Sohanur Rahman is a Change Maker at ‘SRHR for All’. Reach him out at kishanibd@gmail.com