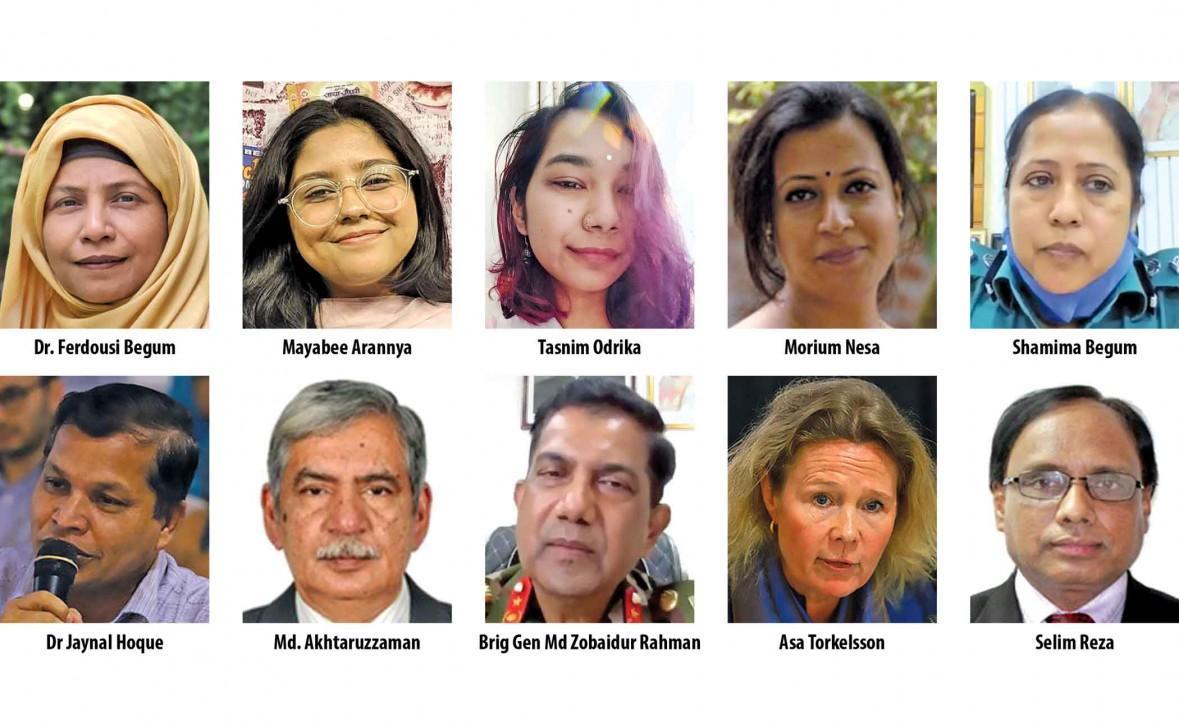 The Daily Star and Plan International Bangladesh jointly organised an online roundtable meeting titled “Involving Adolescent Girls in Decision Making to Ensure Safer Cities”, as part of the Girls Get Equal Freedom in Public Spaces: Safer Cities Campaign 2021 on May 30, 2021. Here we publish a summary of the discussion.

As the world rapidly turns urban, Bangladesh is listed among countries that will soon contribute most to the global urban population. Bangladesh, home to 160 million people, is one of the most densely populated countries in the world. The size of the urban population in Bangladesh is 53 million. Bangladesh’s urban landscapes have also been constructed without considering girls/women’s needs in the design process. With an estimated 70 out of every 100 people in Bangladesh expected to live in a city in 2050, the lack of safe urban areas for girls and women will become an even more critical issue.

The Safer Cities for Girls is a global program of Plan International, which is currently being implemented in eight cities of eight countries and will scale up to 20 countries in next few years. During the country strategy period (2021 – 2030) Plan International Bangladesh will implement safer city program for girls and young women to tackle the unequal power relations and challenge harmful social norms that perpetuate the insecurity and exclusion of girls and young women in cities.

Advocacy to the government related authorities and organizations is the key to Plan’s safer city initiatives for accommodating girls’ voices to provide them safe, reliable, sustainable facilities (i.e. safe transport, open spaces, roads, sanitations etc.), and also to increase their active and meaningful participation in urban development and governance.

So, through this roundtable meeting Plan International Bangladesh would like to understand the obstacles and gaps that need to be addressed in order to ensure safer cities for girls.

When talking about safer spaces for women, I think one of the first things we need to address is the gender norms in our society. It is not just an issue of physical safety, but also about changing societal norms, our mindsets, and attitudes.

We have to understand that creating safe spaces alone is not going to solve the issue. Because how can we really discuss safety when society and our families believe that the only space for women is inside their homes?

Another issue that comes to mind is, when we have conversations about safe spaces for women, it’s either for work or education. But why don’t we consider that women can also go out just for their own pleasure?

I think the first step towards combatting these societal norms would be a well-funded and organised behavioural change campaign.

I think first we need to look at the state of transportation. Ensuring safe public transport is essential to ensure that women can continue to pursue opportunities in education as well as on a professional level.

Unless you’re from a privileged background and can afford the cost of safer transportation, you may find yourself turning down great opportunities. Thinking of it from my own perspective, there have often been days when I’ve had to dread commuting to work simply because I did not have my car.

It’s very common for workplaces to boast about the number of female employees that they hire. But are they really doing enough to ensure proper facilities are in place for these women commuting to their workplaces? I think employers can contribute a lot in ensuring safer spaces for women.

In 2017, we conducted a study about women facing violence in public spaces. In this study, we found that almost 57 percent of women avoided reporting instances of violence because they were afraid of people not supporting or believing them if they reported such an issue. They were worried that people will ask them why they were in that area or wearing a particular kind of outfit. According to this survey 47.5 percent of women in urban areas in Bangladesh felt unsafe in public places like markets, streets and public transport while 88 percent reported facing harassment by pedestrians, passengers of public transport and buyers in market places. What was worse, about 81 percent of women, preferred not to seek help from law enforcement agencies fearing further harassment. Government policy in Bangladesh does not adequately tackle this issue, with no specific laws to combat sexual harassment in public spaces.

A key priority should be to increase the visibility in areas where women are more vulnerable, by setting up more streetlights and surveillance cameras. This will deter perpetrators from harassing women.

Girls and Young Women can call 999 to avail help from the police. Female police officers primarily work in the call centres. People should also keep note of our victim support centres and mobile apps.

Bangladesh Police Inspector General (IGP) Benazir Ahmed has divided every thana into beats. Each beat has a designated sub-inspector level officer responsible for maintaining communication with local people and keeping the area secure. I would request all girls and young women to keep the contact number of their respective beat police officer and reach out to them for any help.

Demographic analysis shows that adolescents aged 10 to 24 years make up one-third of our total population. Given the demographic dividend that we will have until 2030, it is high time to invest in adolescents’ physical and mental health and provide them with adequate academic and professional training. We have not made much progress yet in this regard.

A massive problem among female adolescent groups is child marriage. The Child Marriage Restraint Act was established in 2017, and the guidelines were made in 2018. There are many committees in every sector involved in implementing this Act. Directorate General of Family Planning has been working to delay child birth through offering family planning services.

A multi-sectoral approach is required to ensure adolescent health and safety. The Ministry of Health and Family Welfare provides leadership training to adolescent women and teaches them self-defence. We have sessions on child marriage where we raise awareness on the topic. Such school sessions have succeeded in igniting the power to protest among young girls, in order to stand up for themselves and prevent child marriage. Boys are part of sessions on eve-teasing and drug abuse.

The Safer Cities campaign, launched in 1996, is a concern of UN-Habitat. It has been implemented in 77 cities so far. In reality, we have not made much progress in this regard in Bangladesh. The primary issue is unplanned city development. Due to unplanned development in Dhaka and surrounding cities, it has become challenging to introduce the provisions of the Safer Cities campaign. Female RMG and domestic workers should be included in all plans for safer cities since they need to go out daily for work.

Dhaka is a very unplanned city and it is highly dense. Almost 4,900 people live per square kilometre. Every day, 12,000 to 14,000 people are moving towards Dhaka City. 37 to 38 percent of our total population is based in Dhaka and it is predicted that it will reach a peak of almost 50 percent by 2050.

We are making efforts in protecting maternal and child health by offering comprehensive and quality child and maternal health services from the clinics under City Corporation.

UNFPA is working with the intention to provide safer public spaces. Bangladesh has made commendable advances in gender equality and women’s empowerment. Yet the level of gender-based violence is very high.

We have set up women’s help desks in police stations and courts. We have also set up helplines called Alapon Helpline to provide counselling services for gender-based violence and SRHR. Virtual safety is an important issue too. We must scale up our efforts to reduce cyberbullying, cyberstalking and other such toxic and dangerous behaviours.

No civilisation can flourish without the participation of women in it. Women today are involved in different sectors in Bangladesh. We are providing clinical services at the rural level.

The SDGs include women’s empowerment and adolescence development. We are working to reduce early marriage. We have enforced laws to stop child marriage. We are doing our best to provide security to our girls and hope in the future we will be able to create a safer city for them.