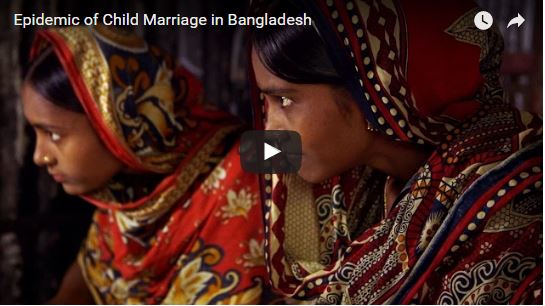 Bangladesh should remove the provision in the draft law permitting marriage under the age of 18 to free itself from child marriage, says Heather Barr, a senior official of the Human Rights Watch (HRW).

Prime Minister Sheikh Hasina has gained a reputation as a champion of women’s empowerment partly thanks to NGOs’ work. “But at her request, parliament is considering legislation that would allow child marriage for the first time in decades,” according to Barr’s article titled ‘Girls’ Rights Hang in the Balance in Bangladesh.”

The current law bans marriage before the age of 18 for women and 21 for men with no exception, but the new provision would permit marriage of girls below age 18 in “special circumstances, such as accidental or unlawful pregnancy.”

The provision is widely criticized to be a backward step since child marriage is deeply destructive to the lives of married girls and their families, starting from dropping out of school, impoverishment, domestic violence and higher health risks due to pregnancy.

The Bangladesh government is yet to take sufficient steps to end child marriage, in spite of promises to do so, Barr claimed though the government depicted progress in the area.