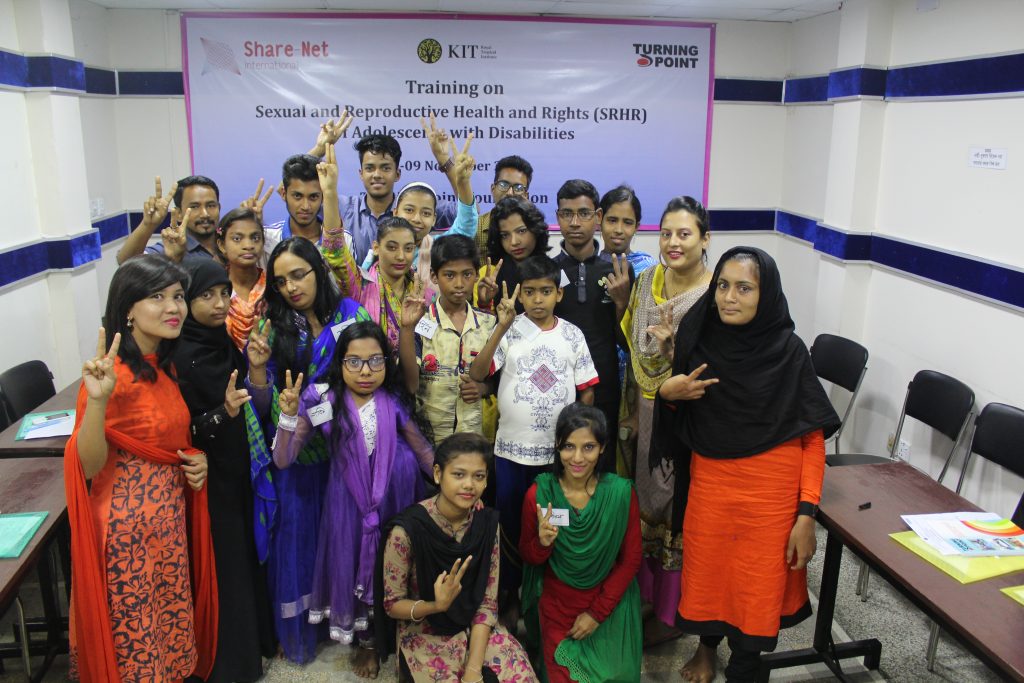 Turning Point Foundation is a non-government organisation in Bangladesh, working to promote development, rights, and inclusion of marginalized people including persons with disabilities, ethnic minorities and disadvantaged people through awareness raising, capacity building, advocacy and other interventions.

One of the biggest achievements that is worth mentioning as a result of this project is that for the first time Directorate General of Family Planning (DGFP) included adolescents with disabilities and their recommendations into the finalized ‘National Plan of Action on Adolescents Health Strategy 2017-2030’ which was published in December 2019. Also, for the first time, the DGFP formed a working committee to address SRHR for persons with disabilities.

As part of this project, a handbook was developed in Bangla which addresses SRHR for adolescents.

A report was compiled by adolescents that included findings and recommendations, and it was validated by leaders with disabilities. This report was recognised by the DGFP, and inputs from this report were used in the National Plan of Action. The recommendations included what adolescents expected and wanted for themselves regarding their own SRHR. A poster was developed by women with disabilities which contained messages to raise awareness on ‘Leaving no one behind’ regarding SRHR.

Abu Hanif Muhammad Forhad talks about his experience on this project

Abu Hanif Muhammad Forhad is currently working as the Acting Executive Director at Turning Point Foundation. In 2017, when this project took place, he was working as the Advocacy & Networking Coordinator. Through this project, he was able to work with various SRHR policymakers, practitioners and researchers.

According to Mr. Forhad, the best part of the Small Grants facility by Share-Net International is the fact that the objectives cover a small range which presents an optimistic level of achievability. At the same time, he also suggests that it would be helpful if the time period for conducting the project is longer, and if flexibility is offered, as a lot of time is consumed in bureaucratic tangles.

Mr. Forhad narrates the story of one girl who came to participate in the workshop in Dhaka from Mymensingh.

“Chandni was an adolescent girl with disabilities from Mymensingh. Her parents were planning her marriage against the will of Chandni. At the workshop, we requested Chandni’s mother to be part of the workshop as well. At the end of the training, she expressed that she had changed her mind, and she committed to stopping her daughter’s marriage. Chandni is currently studying in school”

With special thanks to Abu Hanif Muhammad Forhad.

This article is part of the Share-Net International Small Grants blog series.