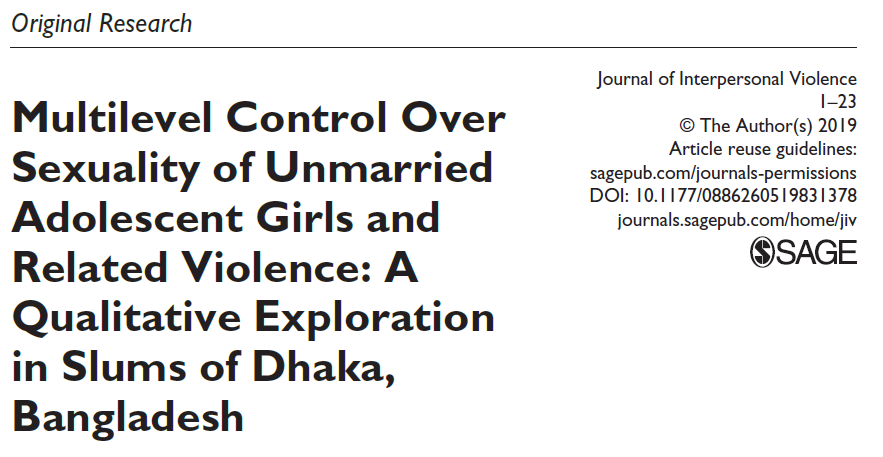 High concerns about sexuality of unmarried adolescent girls (UAGs) in patriarchal societies and perceived links between sexuality and honor are likely to trigger controlling behavior and underlie a range of violence perpetrated against them. These concerns are heightened in the urban slums of Bangladesh, where economic and social changes challenge traditional gender roles and behaviors. Little is, however, known about control of and violence against UAGs perpetrated by families, romantic partners, and community. Using 12 key informant interviews, 15 focus group discussions, and 27 in-depth interviews carried out between June and November 2011 in Dhaka slums, this study explores the sociocultural expectations around sexuality of UAGs, how they interact with ground reality, control, resultant conflicts, violence against UAGs, and the ways UAGs grapple with controlling behavior and violence. The findings show that perceptions, attitudes, and expectations about the behavior of these girls remain patriarchal despite changes in economic and social circumstances reshaping gender roles and practices. Patriarchy finds new ways of controlling the girls by imposing dress codes, setting new boundaries for mobility and interaction with the opposite sex, and inflicting different forms of violence at different levels of the society. Some girls attempt to avoid violence by conforming to the new rules, while many negotiate the new boundaries with the family, romantic partner, and community. UAGs sometimes make compromises in one domain or level, while they resist control and violence in another. The findings lend support to the patriarchal bargain theory. Promotion of non patriarchal norms is expected to reduce vulnerability of these girls to violence.