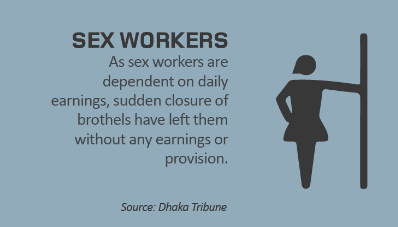 The life of sex workers on the streets, hard as it is during normal times, has taken a worse turn after the coronavirus pandemic hit the country.

Many floating sex workers have been pushed into begging, as their regular means of income has almost disappeared.

They are also facing assault and harassment at the hands of local goons, law enforcers and other people, living on the streets.

Mukta, 40, a floating sex worker, shared how she was attacked and wounded while looking for clients near Golap Shah Mazar at Gulistan in the first week of April.

She said three young men availed her service and were about to leave without payment. When she asked for money, they berated her for sex work amidst the shutdown and then beat her mercilessly. One of them hit Mukta on her nose with a shard of blade.

“The wound required six stitches and I think the scar will never heal,” said Mukta, who now begs on the streets.

At least five other sex workers shared similar experiences with this correspondent.

They said they are compelled to come out on the street risking coronavirus infection as many of them have children to feed and families to support.

Mukta said for the last three months she could not pay the monthly fee of Tk 2,000 for her two kids, who live at a private shelter for sex worker’s children.

“The shelter in-charge has been calling and yelling at me for the money. How can I make her understand that I’m in such a condition that I am having to skip most of my meals?”

Aleya Begum Lily, general secretary of Sex Workers’ Network (SWN), a platform for 29 sex workers’ organisations, said, most of the around 1,02,000 sex workers including the 5,000 registered in the 10 brothels of the country are jobless now.

In the capital, there are almost 20,000 sex workers, of whom 8,000 sell sex on the streets, hotels and rented apartments, she added.

Those who lived in hotels or failed to pay house rent  are now living on the streets, in the parks, mausoleums, railway stations or under the bridges, Aleya said.

A large number of sex workers, who work under brokers, have also been suffering due to a sharp decline in their clientele.

Nazma, who lived and worked along with five other girls at the capital’s Rayer Bazar area, was facing routine abuse at the hands of their drug addict broker.

“It was his responsibility to manage clients for us. Yet, he would hit me on my head as I couldn’t give him money [due to decline in business],” said Nazma.

“I escaped in April after a physical assault. Currently, I am begging and sleeping at the Gulistan Golap Shah Mazar,” she mentioned.

Drop-in-centres (DICs) for sex workers are also becoming difficult to run because of the pandemic, informed officials of Light House, an NGO funded by the international development agency Save the Children.

Across the country, Light House has 27 DICs, where sex workers usually stay from 9am to 5pm.

Md Zalkad Ali, coordinator of the NGO’s Chankharpul DIC, said, “It has been difficult to continue our work because of constant pressure to shift the office. Many [landlords and neighbourhood people] treat them [sex workers] as suspected Covid-19 positive cases since they have roam the streets and mingle with unknown men.”

“My landlord sent us a notice to vacate the flat immediately, and restricted the access of the sex workers. We disinfect the stairs, maintain social distance and hygiene, yet they have been harassing us in different ways,” he added.

Another DIC coordinator Rina in Gopibagh also mentioned getting an eviction notice during the shutdown.

They, however, managed the landlord by limiting the number of sex workers who can enter and use the facility at a time, she said.

Beforehand, 15-20 sex workers used the DIC per day, but now a maximum of ten people are allowed, she added.

Nazma said she and others like her now use the DICs only to take showers.

Though the registered sex workers living in the brothels received some aid from the government, the floating ones didn’t receive any, said Aleya Begum.

Of the 29 organisations under the Sex Workers’ Network, 19 were provided Tk 3,50,000 during April-May for distribution of food and other essentials among their members, Aleya informed.

“Few may have received some relief as a distressed woman but not as a sex worker,” she added.