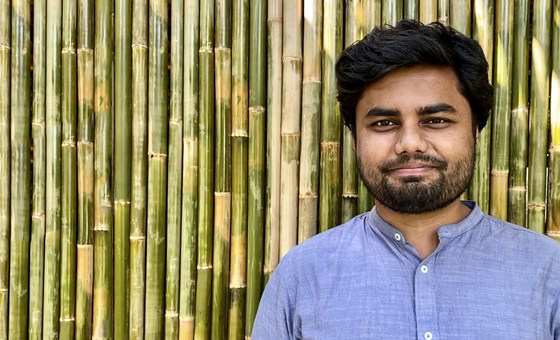 Bangladeshi architect Rizvi Hassan is the driving force behind the construction of a safe space for Rohingya women and girls, in Cox’s Bazar, Bangladesh, site of the world’s largest camp for displaced people, and home to around a million Rohingya refugees who fled from Myanmar. The community centre caters to a marginalized, vulnerable group, at risk of gender-based violence.

The centre, designed and built by Rohingyas, provides counselling and training to the women and girls, as part of a project by Bangladeshi NGO BRAC and the UN Children’s Fund (UNICEF).

Mr. Hassan shares his story as part of the #RealLifeHeroes campaign, by the UN Office for the Coordination of Humanitarian Affairs (OCHA), ahead of this year’s World Humanitarian Day, on 19 August.

“I grew up in Dhaka, the capital city of Bangladesh. While I was growing up, I had an interest in art and science and, later, my sister helped me to discover architecture as a field to explore both interests at the same time. And as I started studying architecture, I found out it could be a lot more.

As a student, I was inspired by architects like Khondaker Hasibul Kabir & Eric Cesal, who particularly address social issues in their design process. I was especially motivated by Kabir, who lived in a slum for few years because he wanted to understand the actual needs of the residents better, rather than design something based on issues perceived from outside: a second or third-hand source of information can misinterpret people’s needs.

I worked for a contemporary architecture firm for a short while, until I realized I had to be involved in something that has more to offer. So, I started working with BRAC on documenting cyclone shelters in Cox’s Bazar, and I came to know others who were working in different sectors on the refugee context here.

We started sharing ideas on what can be done and how we can contribute, and came up with few projects that we could collectively design. As we started working, other organizations became interested in collaborating.

The Safe Space project came about when aid workers involved in gender-based violence discussions in the refugee camp in Cox’s Bazar reported that, based on their findings, the community needed a safe space for women and girls to receive psychosocial support, skill training etc.

We decided to create a building that provides a vibrant interior space and the rooms which separates it from the outside creating a screen itself. The oval shape, with series of columns, are considered to withstand strong winds, in a cyclone-prone area.

I wanted to make an impact on the lives of marginalized people, so I love doing this work. On this particular project, we received very positive feedback from the refugees, NGOs and the host population. It has become so popular that members of the local Bangladesh community also wanted to use the facility.

At the moment 80 per cent of the beneficiaries of the project are Rohingyas and 20 per cent are local Bangladeshi women and girls.

Initially when we began the project, the local community and the refugees assumed we were building a football stadium! Our workers could not understand what we were trying to achieve, and we would draw curious crowds.

When the form began to take shape, people were excited, and the men were keen to use the facility for themselves. But when we explained to them that this was for women and girls, they were quite responsive: they informed their wives and daughters about the facility, and encouraged them to enroll.”