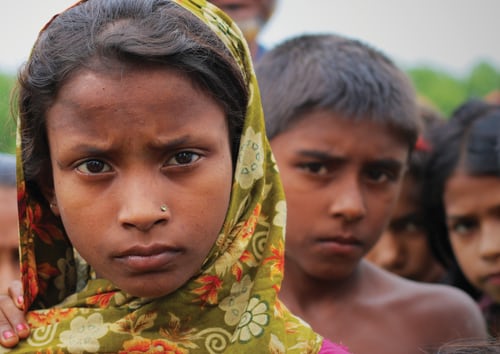 Sex Trafficking in Bangladesh: A Gaping Chasm Worse Than Death

While Bangladesh is thriving to graduate from the least developed countries (LDC) status and showing remarkable growth in terms of economy, some challenges are still creating barrier to its development. These barriers are quite deeper and extensive than what we can feel. And among these, sex trafficking is one of the biggest security concerns for Bangladesh. Approximately 400 women and children in Bangladesh fall victims of trafficking each month, a Unicef report says.

The Journey of Trauma: The Story of Lata and Rupa

Now 19, in a brothel of Mymensingh, Lata (pseudonym) is living being dead inside. Between 700 and 1,000 women and girls are working here currently, many of them against their will of course. They live here in an extremely poor condition. Like most of her co-workers, Lata was trafficked into sex work. At 13, she fled from her house only to run away from her abusive husband with whom she had to go through a forced marriage. She escaped with a hope to get a chance to work in a garments factory only to be found and to be sold to a brothel in the name of giving food and shelter

She became a prisoner within the brothel until she could pay her debts. “She bribed the police to say I was 18. Then she seized my mobile and locked me in a room. She said that she’d hurt me if I tried to run away.” She soon realised that escaping was never an option. For excruciating six years, she has worked to pay off her debt. Then last year she was told she had paid off her debt. But this has inflicted a grave scar on her tender mind leading to several attempts to kill herself. Their wound is thusly deep-rooted. (Source: The Guardian)

Rupa (pseudonym) was a domestic worker from Chittagong. She was sold at a red-light district of India’s West Bengal six years ago. Rupa (22) had left her two young children with her relatives in Ramu, Cox’s Bazar, and moved to Jashore to work as a domestic worker.

“My employer sold me for 120,000 taka in Haldia, where I spent five years forced into prostitution,” she says. She added that she wants to go back to her own homeland, but it is not currently possible for her due to her father’s sickness. Who would feed her family is she goes back? (Source: The Dhaka Tribune)

The 2014 Global Slavery Index (GSI) says that there are about 36 million victims of trafficking in the world, and almost two-thirds of them are from Asia. According to International Labour Organization’s (ILO) research, more than a million of children become victims of sex trade. Given the low conviction rate, the actual number is higher. Sex trafficking is a criminal and one of the fastest growing criminal industries generating an estimated $150 billion a year according to ILO. It operates on the basis of supply and demand where this demand is created by men who pay for commercial sex, ensuring that sex trafficking continues to exist, says Equality Now.

Current Vulnerabilities in Context of Bangladesh

COVID-19 has increased the exposure of our children to traffickers. Save the Children and Unicef suggest that, “Immediate loss of income means families are less able to afford the basics, including food and water, less likely to access health care or education, and more at risk of child marriage, violence, exploitation and abuse.” With people going jobless and out of money, they are more likely to abandon their children or use them for earning livelihood.

Apart from the pandemic issue, the increased number of Rohingyas has also put Bangladesh in a vulnerable position in terms of sex trafficking.

Steps to Take: Now or Never

Although Bangladesh is gradually advancing towards achieving the Sustainable Development Goals (SDGs), but this achievement would be meaningless if we cannot align with the SDG targets in practice, specifically Target 16.2 (“end abuse, exploitation, trafficking and all forms of violence against and torture of children”).

To address this evil, we have to take immediate steps, and for that we have to work from a various number of levels. Apart from strengthening policies, we have to raise awareness in the grassroots level, and for that, more campaigns and trainings need to be arranged. The awareness should reach out to every sphere including the community people, faith-based leaders, local government representatives, law enforcement agencies, media, etc. Practising healthy behaviours in relationships is also necessary.

For repatriation of the victims and reducing the number of trafficking, the government needs to collaborate on a regular basis with different agencies and ministries of neighbouring states. In an effort to rehabilitate the victims, long-term institutional support and linking them with income-generating activities are essential. Hence, raising awareness regarding gender equality is a must, especially to ensure equal wage rate in the labour market.

“The lack of evidence and witnesses help the traffickers secure bail easily,” says Tapoti Bhowmick, secretary of Kolkata-based rights group Sanlaap. Also, the traffickers often get bails or avoid arrest by bribing the police and using the loopholes of the law. So, it is essential that the laws are enforced strongly, not only enacted. Moreover, the conviction rate for trafficking is quite low. While more than 6,000 people have been arrested in connection with human trafficking since 2013, only 25 were convicted in Bangladesh, according to the Dhaka Tribune. Without strict enforcement of laws and community-level awareness, it is not possible for a populated country like Bangladesh—especially where a huge number of refugees are staying—to address this challenge.

Do you remember Lakshmi, the 13-year-old lively and naïve girl who was sold into prostitution in the famous Patricia McCormick novel “Sold”? We found her saying, “This affliction—hope—is so cruel and stubborn, I believe it will kill me.” The children facing the bitterest pain everyday such helplessly—this is the terrifying scourge that poses a greater threat on the children’s as well as their families’ rights and psychosocial health than we can imagine. If we don’t take serious measures now, many more victims like Lakshmi, Lata, and Rupa would just remain a statistic and the destruction would go on. It is high time for us to work collectively from all walks of life not only to address this particular problem, but also to protect human rights. As Nelson Mandela said,

“To deny people human rights is to challenge their very humanity.”