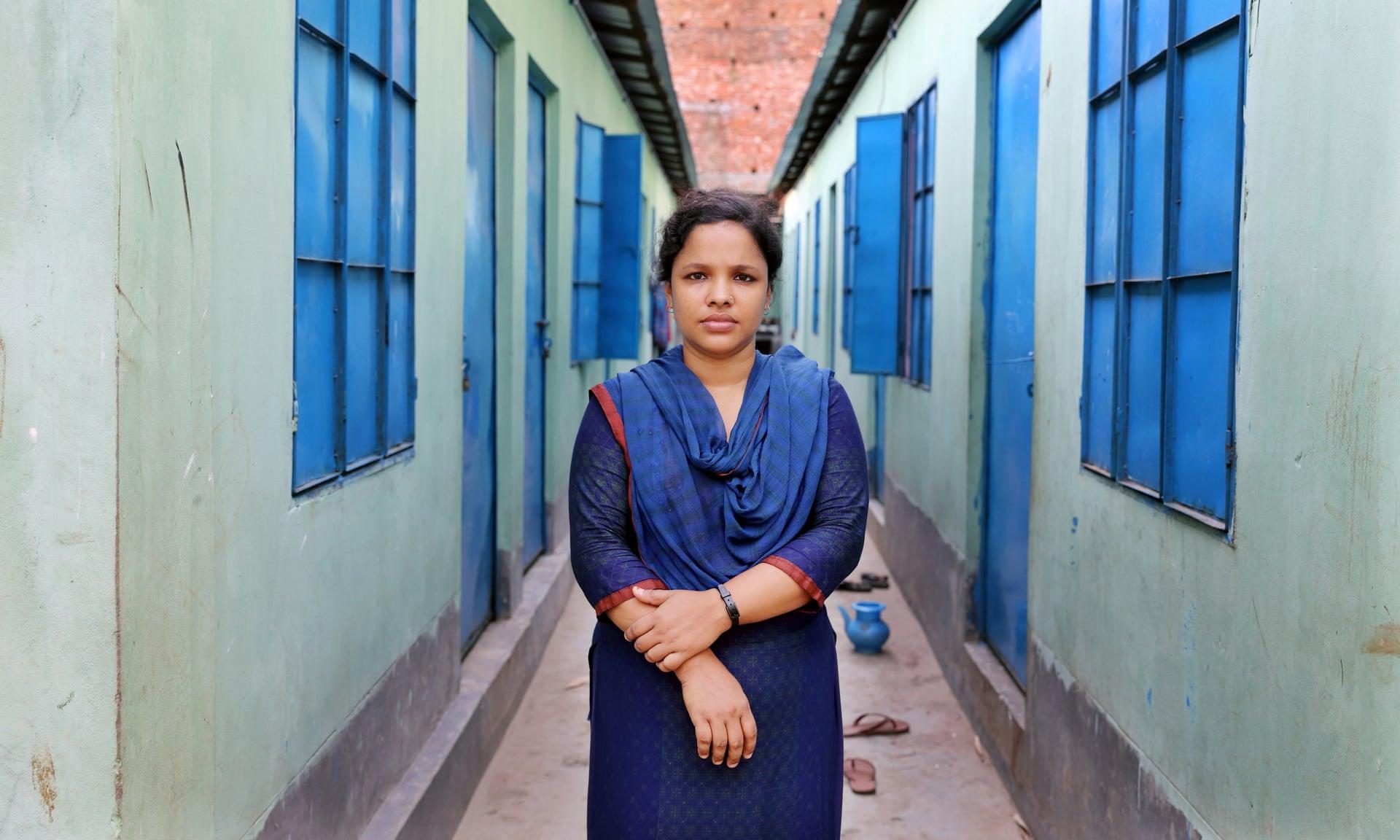 Women routinely face sexual assault and exploitation in factories, many of which supply western brands. A grassroots movement is helping victims to seek justice.

Dolly Akhtar was only 16 when she started work in a garment factory in Dhaka, Bangladesh, stitching clothing destined for shop floors in western countries thousands of miles away. She accepted the long hours and low pay, but what she wasn’t expecting was the sexual advances of her older, married line manager.

“When the line manager at the very first factory I worked at tried to get me to sleep with him, I was terrified,” she says. She left her job and found another but encountered similar problems there. “At the other factory, the management would curse and hit us. The men leered at us,” she says.

Sick of the harassment, Akhtar decided to fight back. She went on to spearhead efforts to form a union in the factory where she worked so that other young women would be better protected. When management got wind of her efforts, her supervisor locked her in his office for hours until she signed a resignation letter.

“Once factory owners decide they’re going to retaliate, they make sure that you can never find work in a factory again,” she says. “I decided then that from now on I would only work on behalf of workers and never for management again.”

A decade later, Akhtar is at the forefront of a grassroots movement to try to expose the rampant sexual harassment, assault and exploitation that have become a mainstay of working life for women in Bangladesh’s textile industry.

There are an estimated 2.5m textile workers – mostly women – working in more than 4,200 garment factories in Bangladesh. After the collapse of the Rana Plaza factory in 2013, where more than 1,000 workers lost their lives, the Bangladeshi government and western brands promised to facilitate the presence of unions inside factories and improve worker safety. Yet there remains very little focus on the gender-based violence and exploitation routinely faced by female workers. According to recent research, 80% of them either experience or witness sexual abuse or harassment at work. Yet few feel able to report this abuse or seek justice.

Akhtar says this is down to a combination of deeply entrenched discrimination, a lack of female representation in political life and worker unions, and the shaming of women who come forward with claims of sexual assault.

Since she left the garment factories in 2015 to become a full-time organiser for the Sommilito Garments Sramik Federation, one of Bangladesh’s largest trade organisations, Akhtar has become known for taking on sexual assault cases that other activists are hesitant to handle.

One of the women who have come to her for help is 20-year-old Hafsa Begum.

In May Begum had finished a night shift at her factory job in the capital, Dhaka, and was eager to get home after working overtime to fulfil orders ahead of the Eid al-Fitr holiday.

“I was extremely tired since I’d been working since eight o’clock in the morning and was walking slow. The other girls walked ahead of me and that’s when my line manager seized the opportunity. I kicked and slapped him but he still managed to drag me into a dark alley next to the factory,” Begum explained. She says he forcefully kissed and touched her. Before letting her go, the line manager told her, “I told you, you’re going to be mine.”

In the seven months she’d been working at the factory, Begum had faced harassment from her line manager, who wielded power over junior machine operators.

“He asked me to go out with him. When I said no … he began to make my life hell,” Begum says. The more she resisted his advances, the more dangerous his threats became. He warned her that if she didn’t have sex with him he would make sure she would lose her job.

The morning after the assault Begum didn’t go to work. “I was so scared, I didn’t know what to do.” Then she remembered Akhtar. “I’d heard there was a woman, a union organiser, that helped factory girls who had been abused,” she says.

Akhtar immediately sprang into action. To help Begum, she rallied her contacts in the local industrial police and went to see the factory management in person. Hours of negotiations later, the line manager was fired.

Yet speaking out has its consequences. Although the line manager was fired, Begum didn’t return to her job. Akhtar negotiated a resignation compensation deal for her, but soon after she resigned, Begum started receiving threatening phone calls from different numbers. She was forced to leave her family and her apartment and move to a different part of the city.

“This happens frequently. Even if I do manage to get the girls justice, their lives are still in danger,” she says. “They have to uproot everything and they live in fear for years.”

This is the challenge that activists like Akhtar are up against. A deep-rooted fear of shame and reprisals is helping to silence the victims of sexual violence within Bangladesh’s garment industry, says Aruna Kashyap, senior counsel of the women’s rights division at Human Rights Watch.

“If garment workers didn’t face retaliation for exposing sexual harassment, many of them would be screaming #MeToo at the top of their lungs,” she wrote in a 2017 report. “Their experiences are part of the global crisis of workplace sexual harassment, less visible in places like garment factories but no less important than the high-profile cases involving Hollywood, the media, and political figures.”

In May 2018, Asia Floor Wage Alliance and Global Labor Justice issued reports alleging gender-based violence in the Asian supply chains of major western brands. The companies said they would investigate the allegations, yet Kashyap claims that western brands who source from factories where sexual abuse is taking place are still not doing enough to stop the violence and exploitation. To do this, systemic changes in the way that brands monitor their supply chains are needed to begin to tackle the abuse that women face.

There is little political will to acknowledge the problem or help women get justice. Bangladesh’s High Court Division of the Supreme Court issued detailed guidelines against sexual harassment at work in 2009, but there is no process in place where workers can complain without retaliation.

The garment industry in Bangladesh is one of the biggest contributors to economic growth in the country, comprising over 80% of total export revenue annually in 2017 and 2018. There is no political or economic incentive to acknowledge or act on the sexual violence facing women in the industry. Factory owners are invested in keeping experienced managers around because it’s hard to find skilled people for those roles, whereas machine operators and workers are easy to replace.

In March 16 women went on a hunger strike in front of the factory where they worked in protest over the alleged sexual harassment of an 18-year-old colleague by an assistant production manager. Although the factory claimed that the manager was sacked – a claim disputed by workers at the factory – they dismissed the woman’s claims as “nothing serious”. They also fired the alleged victim and the 16 protestors for “disruption” without paying them their wages. No police report was filed because the alleged victim was scared of stigma and reprisals.

“The economy of this country is dependent on the labour of women but we are the least protected,” says Akhtar.

She has worked on dozens of sexual harassment cases over the last five years, often meeting victims in secret so there is less of a chance of being seen by others in the community.

But without women agreeing to file police reports, Akhtar says there is a limit to what she can do. “The women are afraid it will taint their reputation,” she says. “I always recommend [that women go to the police], but hardly anybody ever agrees, which is why the most I can often do is get the perpetrators fired.” Instead, she is limited to trying to bolster the power of women workers by training them to form unions and helping to enforce labour laws.

She says her work trying to get justice for women facing sexual assault in the workplace has taken a toll on her family life.

“I haven’t been able to bond with my son who mostly lives with my mother in our village. I see him when he comes to visit me during holidays but our relationship is strained. We barely know each other,” she says.

“A couple of weeks [ago] I got a phone call in the middle of the night. A man threatened to rape me if I [didn’t stop] instigating girls to talk about ‘dirty things’. I acted brave to him, but the truth is that I know this is the most dangerous thing women and girls in the factories can speak up against.”

Picture: Dolly Akhtar has spearheaded a grassroots movement exposing sexual harassment for the past 10 years. Photograph by Fabeha Monir