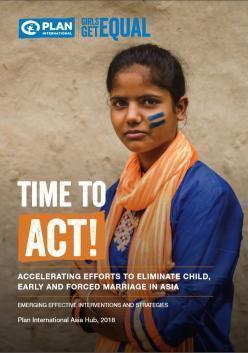 Child, early and forced marriage scourges the lives of millions of girls globally and across Asia, gravely affecting and undermining their integral wellbeing and health, while exposing them to severe violence and stripping them of their basic rights. By disproportionately depriving girls of their opportunities for education, economic independence, and social and civic participation, this harmful practice slows down the overall progress of societies resulting in an ever-increasing human and economic toll to be paid.

Plan International firmly commits to preventing and eliminating child,  early and forced marriage through holistic interventions and in partnership with a range of actors and stakeholders. Building on the comprehensive body of research into the root causes and detrimental consequences,  we have further invested in identifying and exploring the effective interventions and strategies that have proven to be significantly reducing  this widespread practice.

We have now gained increased evidence that only through combined integrative action addressing all root causes simultaneously – challenging social norms, strengthening legislation and its consistent enforcement, and providing economic and social resources and safety nets – will we be closer to achieving the global ambition to ending child, early and forced marriage by 2030. Tackling the gender inequality and discrimination that trigger this exploitative practice remains an imperative to inform and guide all  relevant strategies.

Particular attention has been given to youth involvement and activism,  which brings in innovation and breaks the vicious spiral of social exclusion, gender stereotypes and harmful traditions. Youth-led actions will further inspire and refresh collective efforts to eliminate this social blight.

Better equipped with this knowledge and renewed evidence, we are determined to contribute to accelerated action, urging for immediate response and increased investments. The time to end child, early and  forced marriage, once and for all, is now!