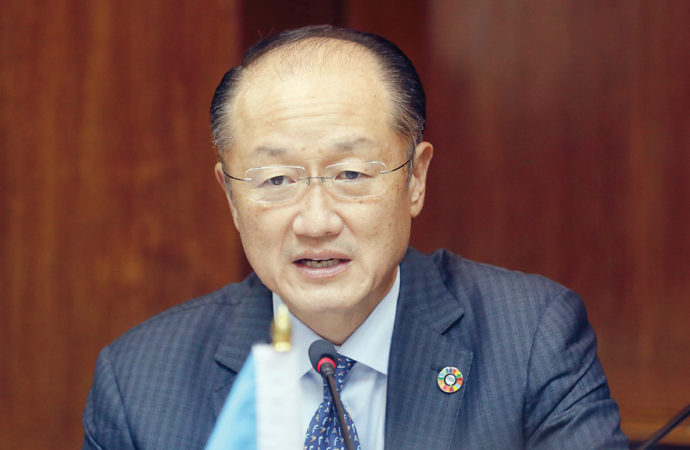 World Bank President Jim Yong Kim praised the development of Bangladesh in poverty alleviation and women empowerment during his two-day maiden visit to the country on this week’s Monday. The South Korean-American physician and anthropologist, Kim is the 12th president of the World Bank, and the first without a formal background in finance or banking.

Kim said as people of Bangladesh were hard-working, they never fell behind. He went Barisal on Tuesday to visit the WB funded project in Rakundia village of Babuganj upazila and Bharshakathi village of Wazirpur upazila. The project named Notun Jibon (new life) began in 2012 under the supervision of Social Development Foundation (SDF), an autonomous and not-for-profit organization by the government under the Ministry of Finance, aiming to alleviate poverty of local women and lift their standard of living.
Kim expressed his satisfaction over the success of the project after talking to some women of Rakundia Gram Samity (Rakundia village association), who were benefitted from the project. Kim said Bangladesh would get more investment assistance from the WB.
Meanwhile, correspondents of Dhaka Tribune, a national daily, talked to Sheuli Begum, a beneficiary of the project at Rakundia village, about the visit of Kim.
Sheuli said: “I am very happy that the World Bank president has visited my home and talked to me.”
Sheuli is doing well now with her three children.
Her eldest son works at a factory, while the other reads in class eight. Her daughter is a student of class four.
When Kim asked her whether she would arrange her daughter’s marriage at the age of 15, she asserted that she would never do it.