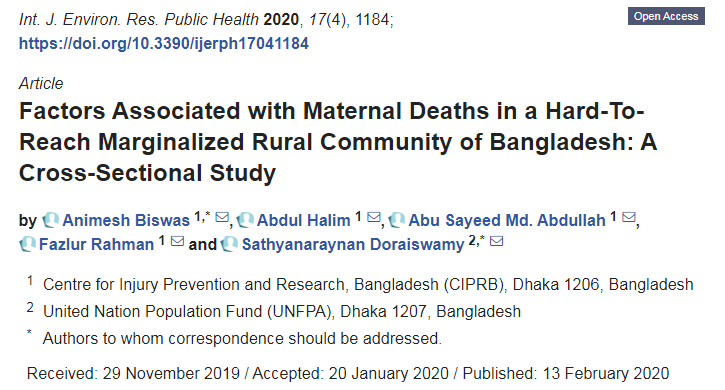 Factors Associated with Maternal Deaths in a Hard-To-Reach Marginalized Rural Community of Bangladesh: A Cross-Sectional Study

Every year in Bangladesh, approximately 5200 mothers die (172 maternal deaths/100,000 live births) due to maternal complications. The death rate is much higher in hard-to-reach areas and underprivileged communities, such as Bangladesh’s tea gardens. The women living in the tea garden areas are deprived of quality health care services due to inadequate knowledge, education, and access to health care services. Poverty and early marriage, followed by early pregnancy, are also triggering factors of maternal deaths in this community. This study explored the factors associated with maternal deaths in the underprivileged tea garden community in the Moulvibazar district of Bangladesh. It was a cross-sectional study conducted between January and March 2018. All maternal deaths reported by government health care providers in two sub-districts of Moulvibazar during 2017 were selected for community verbal autopsy using a structured questionnaire. Descriptive analysis was performed on quantitative data, and content analysis was performed on qualitative data. A total of 34 maternal deaths were reported in the two sub-districts in 2017, among which 15 deaths (44%) occurred in the tea garden catchment areas, where about 34% people live in the two upazilas. The majority of the mothers who died in the tea gardens delivered their babies at home (80%), many of whom also died at home (40%). Only 27% of women who died in the tea gardens received four or more antenatal care visits. Post-partum hemorrhage was found to be the leading cause of death (47%), followed by anemia (33%) and eclampsia (20%). There is a persistent high maternal mortality observed in the marginalized tea gardens, as compared to the general community of the Moulvibazar district, Bangladesh. The sustainable development goal (SDG) that has been set for maternal mortality rate (MMR) is 70/100,000 live births in Bangladesh. The findings of our study show that focused intervention is needed to reduce the burden of maternal deaths, which will improve the overall maternal health situation and also reach the SDG on time.