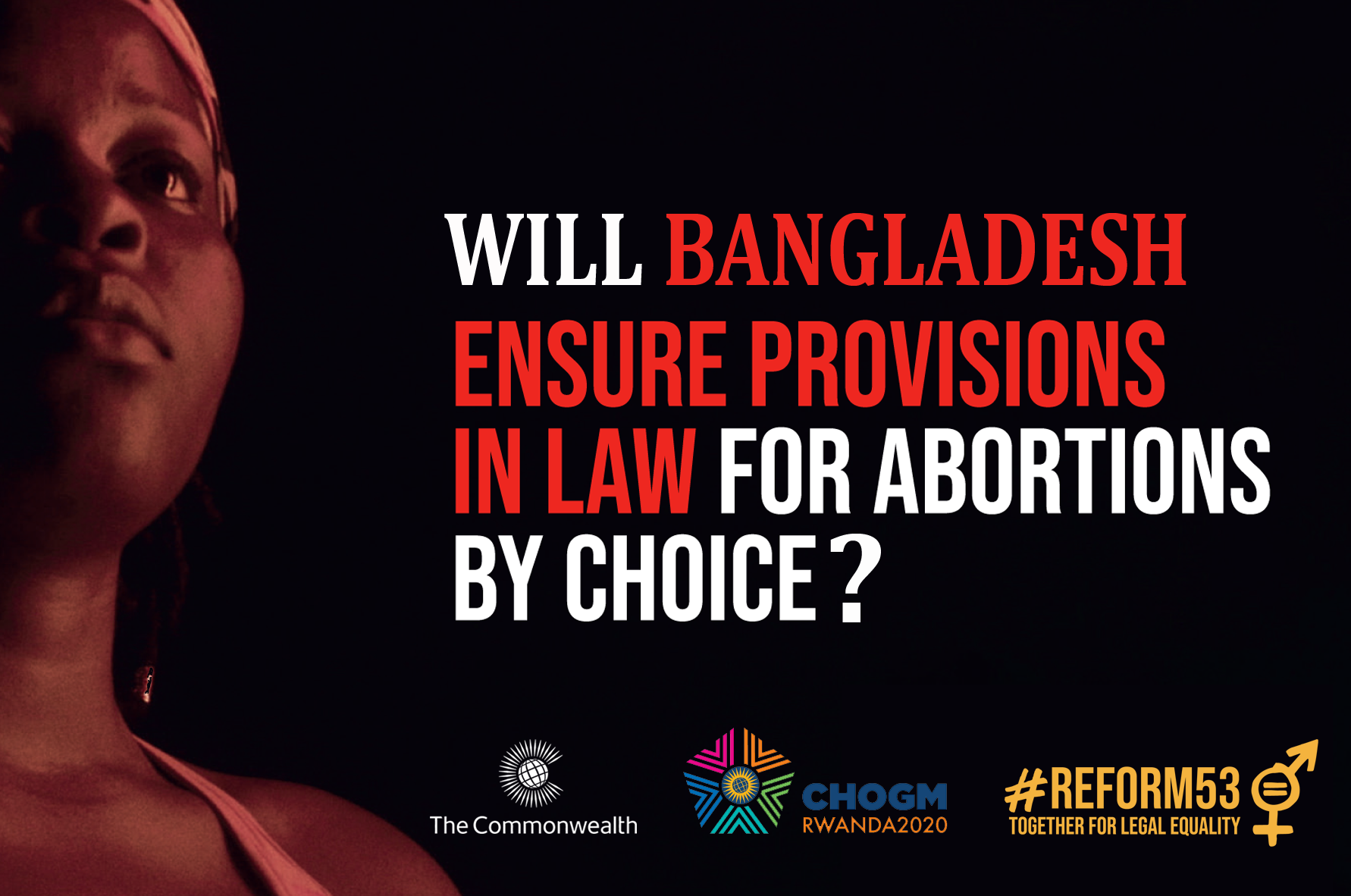 Abortion by Choice: Will Bangladesh Reform its Colonial laws?

While going through a typical Facebook post last week, a woman posted a write-up showing her bitter experience in making her 5 year old son’s passport. She felt harassed and powerless as the passport office asked her to bring a written consent of her husband, who already divorced her. According to the post, she was furious and mentioned that she would slap anyone who says that gender equality has already ensured and there is no need of women’s day anymore. This is one tiny example that can be mentioned from the past couple of days. If we go through the stories of women and transgenders every day, we might end up losing our eyesight seeing the level of discrimination against them.

These types of discrimination are being institutionalized as some laws reserve the freedom of women and in some cases make the girls, women and transgender community vulnerable in certain degrees.

In many Commonwealth countries it is a crime to have an abortion. This denies women the autonomy to make their own informed decisions and access a safe abortion. Instead, these laws jeopardize the health and lives of millions of women and girls who may then risk an unsafe abortion. According to Bangladesh penal code (ACT XLV, 1860), abortion is only permitted to save the life of the woman and through the section 312-316, abortion by choice has been made a punishable offence and depending on the act, it that can take someone into prison up to ten years, with or without fine.Though these sections prohibit abortion by choice, what can be the impact of the nation where such laws are present or absent?

Across the Commonwealth, laws criminalizing abortion are overwhelmingly a British colonial law and many developed countries are still carrying it.There are currently only 4 countries in the Commonwealth that legally allow women to have an abortion on request: Canada, Australia, South Africa and Mozambique. Abortion is heavily regulated in New Zealand under a number of laws including the Crimes Act 1961. However, a bill has been proposed to decriminalize abortion and make it a health issue instead.

Malta is the only Commonwealth country that prohibits abortion entirely. Abortion is prohibited even if a woman’s life is threatened, making the country’s abortion laws among the strictest in the world. Following these trends, can Bangladesh be another Commonwealth state to reform the existing customary law to ensure women’s rights on their own body?

The summit statement of the 25th Commonwealth Heads of Government Meeting, held in 2018 included that, the Heads were encouraged by Continuing action to prevent and eliminate child, early and forced marriage. The heads were also encouraged to provide support for already married girls, adolescents and women who have been affected by such practices. Despite this declaration, the scenario of forced marriages due to the customary laws, are not satisfactory. The Commonwealth biannual report 2018 says, across the Commonwealth where forced marriages commonly occur, are due to customary laws and practices. In all of these countries, some high numbers of women and girls married under the national legal age.

In Bangladesh, although Muslim family law has attempted to prevent the practice of forced marriages by making consent mandatory, no minimum age limit for marriage is established. According to the Girls not Brides campaign, 59% of the girls marry before the age of 18, with 22% marrying before the age of 15. In 2017, Bangladesh government passed a law allowing marriages of underage girls and boys in ‘special cases.’ Section 19 of this Act delivers that in special circumstances, the Court can give permission to allow anyone under the age of 18 to marry, for protecting the ‘best interests’ of them, with the consent of their parents. There is no provision for having any consent from those children while they are getting married as they are not adults. Till now, there has been no example of any ‘special circumstances’ under which such marriages are permissible in this law as well as there is no explanation as to what constitutes the ‘best interests’ of any child while s/he is getting married. The activists and rights defenders had to go for a long run to ensure girls’, women’s and transgender population’s rights by reforming colonial laws. Now, if the government brings back the laws without any logical explanation, the demand of reforming those laws is essential. Hence, Bangladesh became a focus country for the #Reform53 campaign and the whole youth population of the Commonwealth nations are now looking forward to Bangladesh government’s commitment to reform this customary law.

The Commonwealth is home to 2.4 billion people and 60% of its population is under 30 years of age. Each of those youths is a potential figure for change and together we are an unbeatable force for reforming the discriminatory laws and are ready take the charge of delivering a common future by connecting, innovating and transforming new ideas for a better world. Will the government hear what the youths want? Will Bangladesh promise to reform the discriminatory colonial laws to protect human rigts?

Reach out to Tushar Kanti Baidya by sending him a mail: tsrkbd@gmail.com