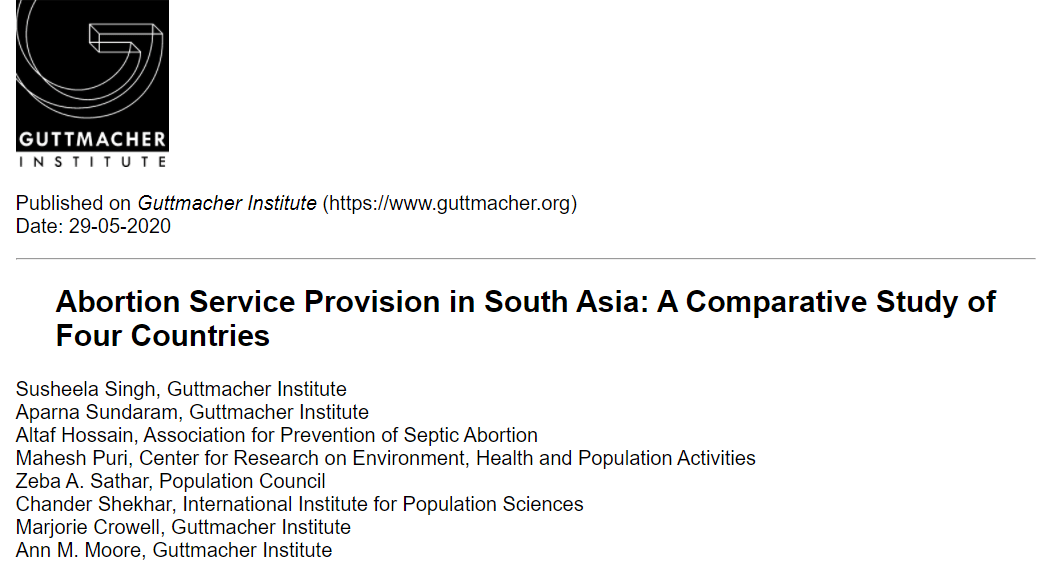 A comparative study on abortion service provision in four countries including Bangladesh was conducted and published on Guttmacher Institute on 29 May 2020.

The paper presents comparable indicators on three aspects of abortion service provision from representative surveys of public and private sector facilities, conducted over 2012-2015.

(a) need for abortion-related care (total number of abortions and percent of abortions that are legal and the post-abortion treatment rate);

(b) availability and accessibility of facility-based abortion-related services (percent of facilities offering only one of the two services, percent which are public and percent located in rural areas);

(c) quality of facility-based abortion care (percent of legal abortions using procedures not recommended by WHO and percent of women turned away when seeking abortion or MR services).

The proportion of all abortions that are illegal ranges from 58% to almost 90% in the three countries where abortion is permitted under broad criteria. The annual treatment rate for abortion complications ranges from about 4 to 26 per 1000 women ages 15-49 across the countries and states covered. In India and Nepal, less than 40% of public sector facilities that are permitted to provide abortion services do so; in Bangladesh, the situation is somewhat better, at 53% providing MR. Across the six Indian states, 4% to 43% of facilities that offer abortion care are located in rural areas, disproportionately lower than the proportion of women living in rural areas (49% to 87%). About 30%-60% of facilities offered only post-abortion care and did not offer legal services in the three countries where legal services are permitted (with the sole exception of Tamil Nadu where this proportion was only 11%); of the remaining facilities, the large majority offered both services. Medication abortion is offered by the large majority of facilities that provide induced abortion and accounts for 40%-45%, of facility-based abortions in Nepal and four of the states of India; in Assam and Bihar, this proportion was much lower (13% and 27% respectively). Invasive procedures that are not recommended by WHO are more widely used in India (up to 25%-37% of facility-based abortions are D&C procedures; the large majority of this group are D&C, and a small proportion may be D&E a WHO-recommended abortion procedure, that could not be separated out in this study because providers use the two labels interchangeably); by comparison, the proportion is much smaller in Nepal (5%). Between 22% to a little over half of facilities turned away some women who would otherwise be eligible for an abortion or MR procedure in Nepal, the six Indian states, and Bangladesh.

There is an urgent need to increase access to abortion, MR and post-abortion services, especially for rural women. Greater access to legal abortion/MR services in the three countries that permit these procedures would increase the proportion of abortions that are legal and safe, reduce morbidity and the need for facility-based treatment for complications. Broadening the legal criteria under which abortion is permitted in Pakistan, and implementing access under such broader criteria, is needed to achieve the same improvements in Pakistan. Ensuring that these services are of high quality and comprehensive—meeting WHO-recommended standards—is essential to protect women’s reproductive health and rights.

To improve access to abortion, MR and post-abortion care in South Asia, all facilities (public and private) permitted to provide these services should do so, and should include medication abortion. Improvements in quality of care are critical: invasive procedures (D&C) should be eliminated through adherence to WHO’s standards of safe abortion care and women seeking abortions should not be turned away because of providers’ biases.