Blog Bangladesh: Child Marriage Numbers Are Falling Very Slowly, when it will be ZERO? 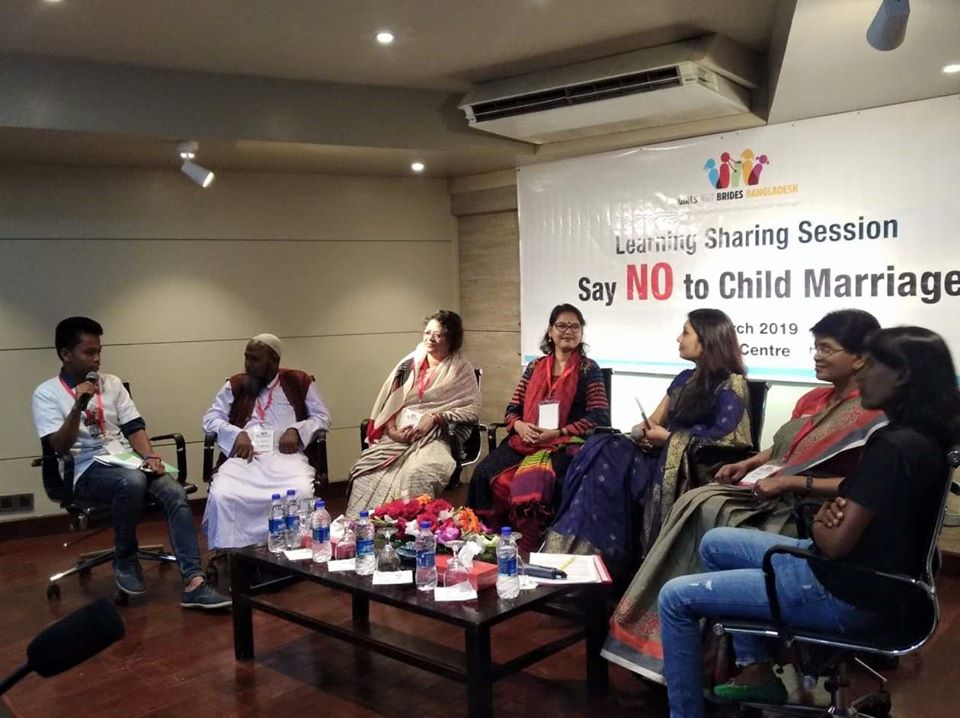 Bangladesh: Child Marriage Numbers Are Falling Very Slowly, when it will be ZERO?

Recently I was privileged to attend a day-long Knowledge Fair on SRHR hosted by the Share-Net Bangladesh Platform aimed to enable researchers, policymakers, practitioners, donors, change makers, students, and media to come under one roof to exchange knowledge on SRHR and create a better life for everybody. As a Young Changemaker, I was more interested to learn about the association between SRHR and child marriage to combat gender-based violence against women and children. It was an excellent opportunity to learn and share.

In the SRHR Knowledge Fair, a Youth Action Plan was declared by the Youth Hub with strong commitments and inspiring words. The Sustainable Development Agendas (SDGs) will not be achieved without young people’s participation and contribution.

At one of the plenary sessions, experts raised questions to the government that child marriage numbers are not falling quickly but many projects are running to combating child marriage by many agencies. The menace of early marriage is still rampant across the country. Speakers also marked questions on the “Child Marriage free district or subdistrict” theory. Dr Obaidur Rob, Country Director of Population Council suggested more effective and sustainable interventions despite wasting many by running traditional projects. Dr. Ashrafunnessa, Line Director of Directorate General of Family Planning said “Keeping with the Prime Minister’s pledge to end child marriage, the Government of Bangladesh has already enacted Child Marriage Restraint Act, 2017 and has undertaken a number of initiatives to prevent child marriage. The National Plan of Action to End Child Marriage (2018-2030) has been formulated to realise the commitments of the government. We have many justifications on special provisions of the Child Marriage Restraint Act (CMRA) 2017. Most of the child marriages are undocumented without legal protection for girls who have married by escaping from their families. We declared all adolescents are children before the age of 18, but we should consider the social aspects of our country”. She said this at the concluding session where she was the Chief Guest. She also mentioned, “Many girls are becoming orphans due to frequent natural disasters. Who will protect them? Who will take the responsibilities of those orphan girls? Special provisions of CMRA2017 will protect them legally also from early pregnancy.” She also mentioned that many interventions has been taken by the government to reduce child marriage.

Dr. Ashrafunnessa has implemented many governmental interventions for ending child marriage including Enabling Environment for Child Rights (EECR). However, I believe that it is the State who should be responsible to ensure appropriate protection for girls and boys. Bangladesh has both constitutional provisions and other legal enactments that seek to ensure and protect children’s rights and welfare. On behalf of the State, our Government is legally bound through ratifying Children Rights Convention (CRC) and enacting law for children. Child Marriage is a major violation of human rights for both young girls and boys, and will not be the best solution or welfare of the best interest, in any cause or context.

In Bangladesh, many young people do not have access to adequate information about their Sexual and Reproductive Health and Rights (SRHR) because of a strong social and cultural taboo and religious pressure around this issue which causes a pervasive silence, which should be broken.

A miss leaded socialization process will build an unequal generation who will not know responsible behavior, especially in romantic relationships. It makes the violence cycle- attack or face. In the era of globalization, satellite culture and internet shapes the processes of socialization of young people. Generally, young people have no proper access to standard and right based adolescent/youth-friendly service centers on Sexual and Reproductive Health. They are sometimes misguided by following wrong information from wrong sources that also include pornography. As a result, many adolescents fall into romantic relationships, engage in sexual intercourse, and enter early pregnancy without any adequate preparation and sex education.

Girls who are married young are more vulnerable to intimate partner violence and sexual abuse than those who marry later. This is especially true when the age gap is large. Even though some parents believe early marriage will protect their daughters from sexual violence, the reverse is often true as the young daughters become victims of sexual violence from their own partners. The current national school curriculum contains only minimum information about SRHR and often teachers prefer to skip this. But needed science-based and informative comprehensive sexuality education and life skills must be incorporated on the upcoming educational curriculum.

According to a report by the United Nations Children’s agency UNICEF, a few years ago, Bangladesh had the fourth-highest rate of marriage in the world, after Niger and Chad in Africa. About three-fourths of Bangladeshi women currently aged 20-49 were married or in a union before age 18, despite the minimum legal age of marriage for women being 18. In the period of 2005 to 2013, according to the UNICEF, two-thirds of girls in Bangladesh were married before the age of 18 and 29% were married before age 15. Again, quoting from the Girls not Brides, an international campaign against child marriage, about 60 percent of girls in Bangladesh are married before their 18th birthday and a little over one-fifth is married before the age of 15. According to UNICEF, Bangladesh has the fourth highest prevalence rate of child marriage in the world, and the second-highest number of absolute child brides – 4,451,000. The median age at first marriage is 15 in Rangpur and 16 in Rajshahi and Khulna. The government of Bangladesh has launched a National Action Plan to end child marriage and has been supporting 5,000 community-based adolescent clubs. These clubs, run by the Ministry of Women and Children, discuss and address harmful social practices like child marriage. The government also operates two helplines (1098 and 109) to combat violence against women and children. It also provides outreach services to women and children to stop child marriage.

I interviewed a Sub-district Women affairs officer from Barishal Division. She is very dedicated and is playing an outstanding role to preventing child marriage at the roots. She expressed her frustration because according to her, no one was doing adequate work to fight child marriage. Moreover, she blamed influential locals, political leaders and religious leaders for the prevalence of child marriage. She even blamed mobile phones and social media for ‘corrupting’ the minds of adolescents. However, whether the ban of cellphones and social media use can combat child marriage is a matter of debate.

I have talked with Rahima Sultana Kazal, Executive Director, AVAS & the Convenor of the Girls Not Brides Barishal Network about the real situation of the child marriage epidemic. She is a well-known women rights defender and development activist. Ms Kazal said, “Under the overall leadership of the Ministry for Women and Children Affairs, the National Plan of Action has been developed as a result of a lengthy, broad and inclusive process of consultations at national and sub-national levels. But child marriage is still occurring because of many loopholes. Court marriage is happening with the help of notary public and using fake birth certificate. Often marriage occurrs without registration. It makes social acceptance but creates more problems for the legal rights of women.

“Bangladesh is making huge progress in reducing child marriage and we must ensure that progress is accelerated over the coming years. Proper implementation of stronger law against child marriage, which does not allow for marriages of girls under 18, will be an important step forward in the right direction. Just making laws regarding child marriage may not serve the purpose. The socio-economic drivers must be addressed along with a vigorous social campaign in a regime of firm political commitment. In order to change the gender norms, collaboration with the Bangladesh government, NGOs, civil society and other stakeholders are trying to address this issue through different policy interventions. It has undertaken awareness-raising campaigns, advocacy programs.” said Ms Anna Minj, Director of BRAC

Sheepa Hafiza is an equality and rights activist, and executive director of Ain o Salish Kendra (ASK) told, `Need immediately rectify the Law, special clause from the Act CMRA2017 should be abolished. Engage citizens of all age, gender, ethnicity and ability to end child marriage, and it was happening during 2012 -2014, but numbers retrieved with the wrong decision & policy.”