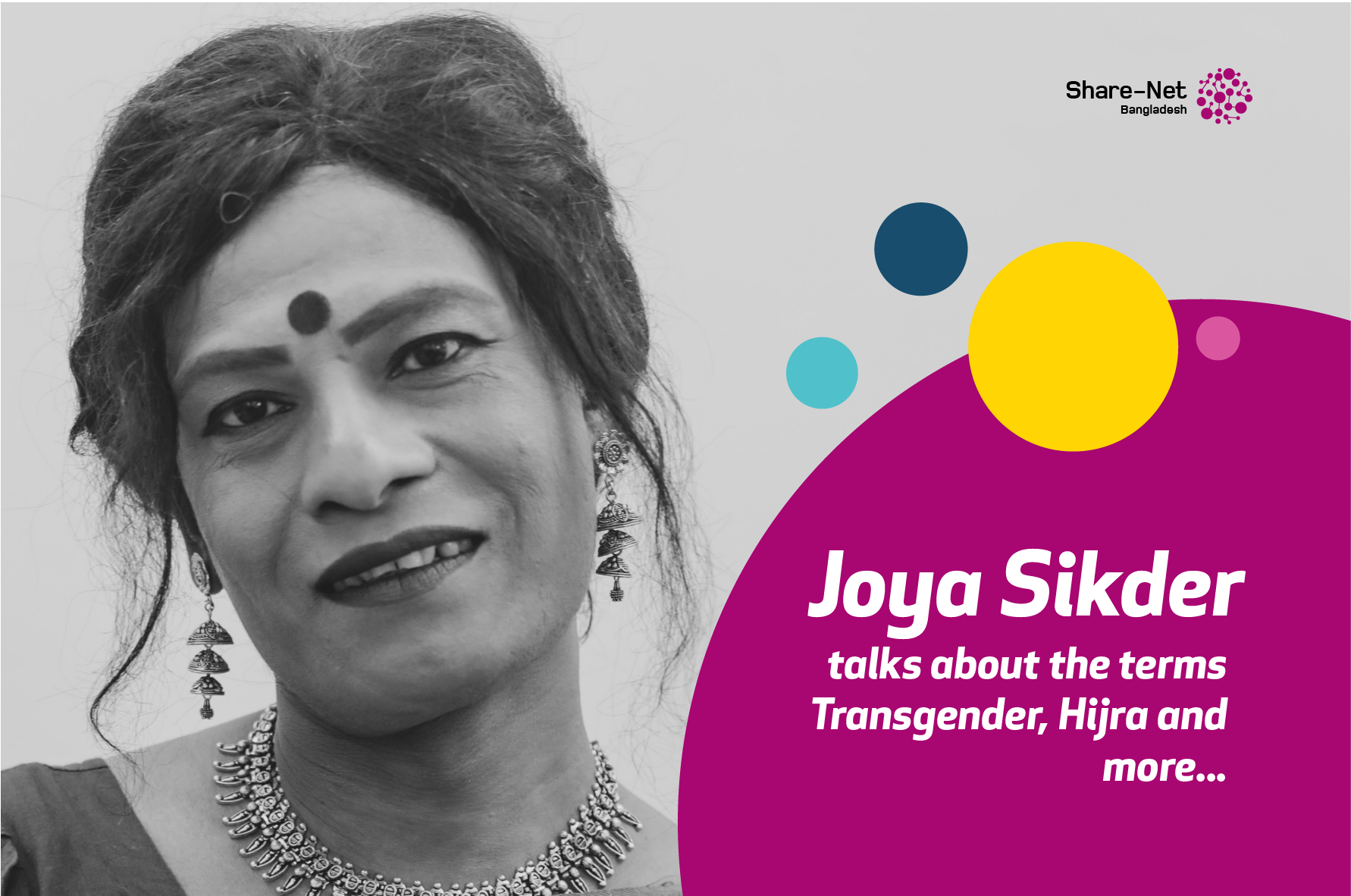 Joya Sikder is the President of Somporker Noya Setu (SNS), an organisation that works to ensure the rights and equality of transgender people through institutional capacity building, advocacy and networking at local, national and regional levels. In this interview, Joya Sikder talks about her life, her struggles and the representation of transgenders in the national agenda.

The government granted recognition to ‘hijras’ in Bangladesh on 11th November 2013. However, many members from the transgender community are not happy by identifying with the term ‘hijra’, as it is often considered derogative. Moreover, the term is defined as ‘people with sexual disability by birth, who because of bodily or genetic reasons can not be categorised as male or female.’ Whereas, being a transgender does not mean that they have a sexual ‘disability’. The term transgender is wrongly translated as ‘hijra’.

What is the difference between transgender and hijra?

When you think of the term hijra, you assume that this is a person who, because of its biology is neither male nor female, or both male and female. It is often assumed that they fall in the category of ‘intersex’ people. In reality, ‘hijra’ is actually an umbrella term that is used to describe a group of people that may include intersex people, castrated men and also transgender women. This group of people live as a community or ‘family’, under a or community leader or ‘guru’. So hijra, is in fact a community, and not a sex or a gender.

Transgender woman, on the other hand is a term used to define the people who was assigned as a male at birth, but at a later stage of life they realise that they identify as a female. The correct translation of ‘transgender’ in Bangla should rather be ‘Rupantorito Nari’, or in contrary cases, ‘Rupantorito Purush’.

The politics of what we wear

In my childhood, I used to choose the girls’ dresses when my father took me to the market. Once my father bought me a dress because I was being too stubborn, but after wearing it, my mother forced me to remove it. She said, “People will laugh at you if you wear that!” I loved wearing a dupatta (scarf) but was never allowed to wear it.  I had a fascination for pretty slippers. One day I bought a pair of slippers with my own money, but it was taken away from me. I had to face obstacles for every little thing I did.

The politics of gender roles

When I was a child, I used to love to follow my mother wherever she went, and observe whatever she did. I loved to help my mother tidy the house and cook food. I loved to observe how she did her tasks, like washing fish, making pithas and cooking payesh (milk pudding).

As I approached my teenage years, my grandfather told me, “You should stop walking like a girl.” Even my younger brother misbehaved with me and even beat me. He did not like the fact that I smiled like a girl.

Arriving alone in the city of Dhaka

After tolerating continuous mental and physical violence from my own family members, at the age of sixteen, I decided to leave my hometown of Patuakhali and arrive in Dhaka on a launch. I left home wearing a dupatta. This is an incident from the early 90s. I believed that in this huge city, living my life would become a bit easier, but I was wrong. The face of Sadarghat during the night, is the entire opposite of that during the day. I faced sexual abuse in Sadarghat on the very next night of my arrival in Dhaka. The next day, I fled that place and reached Gulshan on a bus. After facing a lot of trouble, I found a job at a garments factory, but I faced violence and discrimination there too. The men often touched me inappropriately, yet I could not complain to anyone. I soon discontinued my work there.

I made friends with another transgender woman like me. She told me, “We have to face some sort of violence no matter where we are- in the village, in the city, or in our own homes. People would always want to abuse our bodies and make us victims of sexual violence. We can’t escape being used as sexual objects no matter where we go. So instead of running away, why don’t we take advantage of this and turn it into a profession?”

My friend was right. I took her offer.

Stay tuned to read the next part of this article which will be published next week.