News Climate change, gender equality and SRHR- all parts of the same puzzle 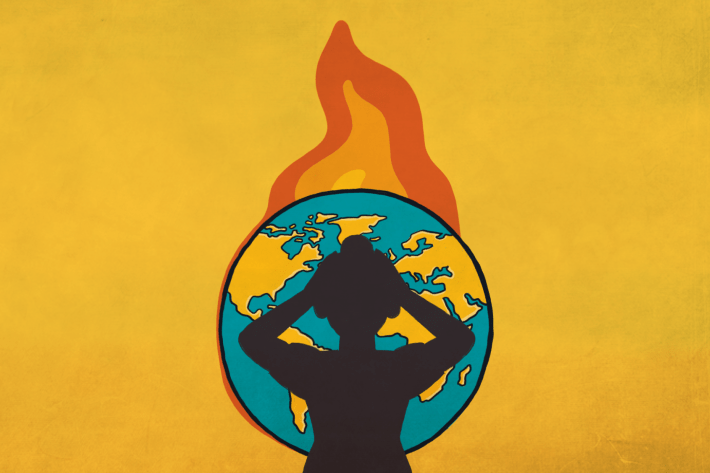 Climate change, gender equality and SRHR- all parts of the same puzzle

According to an article published by IPPF, an often overlooked aspect of the climate crisis is how it intersects with sexual and reproductive health and rights (SRHR). The list of impacts of this intersection is devastatingly extensive, and includes:

Below is a op-ed published on Times of India by Debanjana Choudhuri, Asia Advocacy and Partnerships Advisor, MSI Reproductive Choices and Pratigya Campaign for gender equality and safe abortion.

The global momentum has brought together nations to work towards the common goal of mitigating adverse effects of climate change. Impacting the key determinants of human health, including clean air and water; climate change show gender differential as a characteristic feature. The existing gender inequalities are likely to widen owing to climate change due to biological, socio-economic, and cultural factors.

Given that the role of women is largely dictated by culture’s gender norms and values, women are more vulnerable to poor health outcomes as well as socio-economic effects of climate change. The vulnerability unfortunately is greater where women and girls are denied access to education and have lower status in the society. Denial of access to education leads to economic vulnerability and in the wake of a disaster women and girls are unable to take the necessary steps for survival.

The effect of environmental emergencies is even more severe for the women in the developing nations.

Women are disproportionately affected by climate change. The pattern of energy usage reflects that more than half of the world population cooks with traditional biomass fuels, exposing women to ill-effects of high pollutants concentration (Gender, Climate change and Health, WHO). The rising temperature contributes to conditions like pregnancy-induced hypertension in women, preeclampsia (Makhseed et al, 1999), still birth, congenital birth defects, and preterm delivery.

The extreme weather events accompanied by disasters have left many people devoid of shelter and access to electricity. Climate change crisis has been contributing to power outages. The clinical health setups face a deep crisis with such outages, barring many critical health services. For instance, in Bangladesh, increased incidents of flooding led to unavailability of contraceptives, both in urban and rural areas. Reduced access to contraceptives might lead to unwanted pregnancies, with unsafe abortions causing at least 9% of maternal deaths 1 . Sexual and reproductive health has an urgent need to be a priority in the climate change discourse. In developing countries, 214 million women face unmet needs for modern contraceptives, and we see 99.1 million unwanted pregnancies annually. 2 The countries with unmet needs for modern contraceptives are also found to have high vulnerability to climate change.

What is Missing and What can be done

There exist obvious disparities between genders and gender is often non-existent as a variable when it comes to assessing the effects of climate change. Even at the global level, women’s voice in the climate negotiation space remains unheard. An analysis of 25th UN Climate Change Conference (COP25) reflected that only 27% of the heads of delegations were women. The Gender Action Plan at COP25 can enhance gender responsive interventions in climate change only when there is availability of gender sensitive data.

While women can be the agents of change for climate change actions, there is a need for robust monitoring and evaluation mechanisms across all climate action plans at the global level, with a region-specific set of actions in the lowest governance levels to implement gender-based components. The gender perspective needs to be incorporated in national and international policies to mitigate and to be able to adapt to climate change effects. One of the ways includes prioritizing female education and establishing gender-sensitive benchmarks for indicators representing women’s health and well-being. A sustainable resource mobilization to keep the health services intact for women, addressing the critical aspects of disaster emergencies like addressing GBV, SRHR, childbirth and other medical emergencies, as well as household setups and clean energy, for instance, access to electricity, clean cooking stoves, menstrual hygiene products and other tools, should be a part of holistic framework to be established to let reproductive rights, resilience and climate protection go in hand.

As powerful agents of change, girls and women should be recognized as leaders in advancing global efforts to mitigate climate change effects. Climate and development policymakers urgently need to recognise that millions of people displaced by climate change are being, and will be, exposed to slavery in the coming decades. Policymakers should therefore develop targeted actions, at national and international levels, to address the issue. To make shared progress, collective action and partnership is key. All stakeholders—governments, civil society, academia, media, affected populations, the United Nations, and the private sector—must work together to foreground the linkages of access to education, gender equality and climate change. Realising education is essential for girls, women, and underrepresented populations to be able to exercise their agency and to make choices about their bodies and their lives – essential elements of gender equality.

Climate change affects everybody and every aspect of life, without decentralised energy solutions; without access to education and contraception, women and girls who are already disproportionately affected, will further bear the brunt. There is an immediate need to address the issue of climate change, find green solutions and distribute green resources and green jobs equitably. This requires collective efforts from policy makers, empowering grass roots civil society organisations; youth and bring everyone together in a narrative that sees climate change from a gender neutral rights-based lens.