News Gender, toilets, and a day in a policewoman’s life 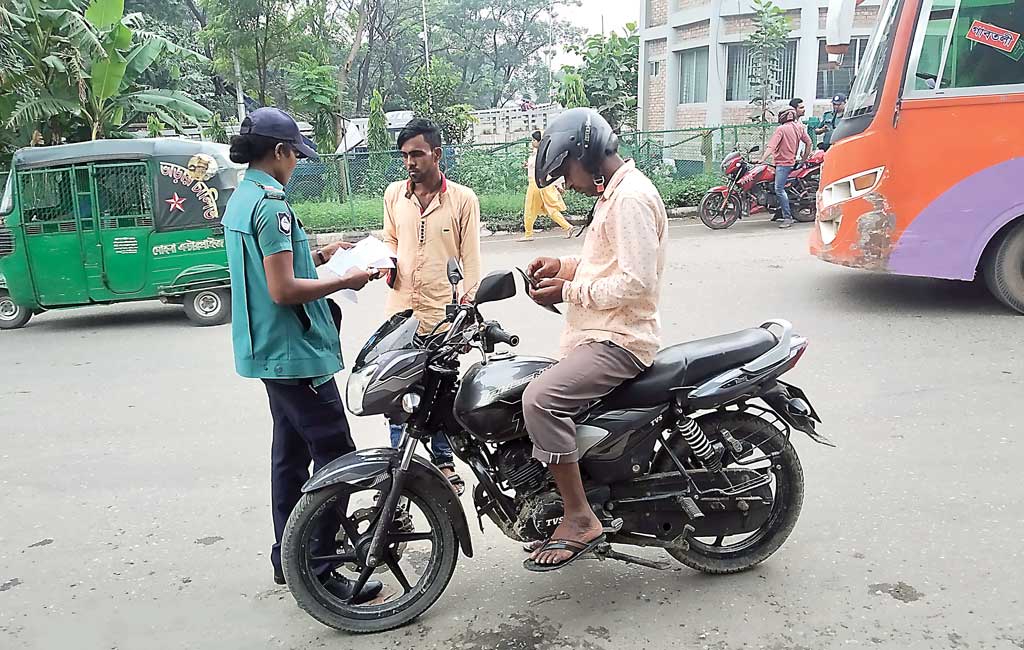 Gender, toilets, and a day in a policewoman’s life

It is ten in the morning. The Dhaka sun is on its way to becoming its unbearable self, regularly hitting above 30 degrees Celsius in October. A cacophony of horns, frantic cries, and the din of construction projects attest to the breakneck urgency of the citizens of this ever growing, overcrowded, poorly equipped metropolis.

At the intersection of Rampura, Badda, Banasree, and Hatirjheel, a woman traffic police sergeant in uniform stops a pickup truck.

The driver who so casually ran a red light, appears to grovel before the traffic sergeant.

“Please forgive me madam. I admit my fault. It was wrong of me. I swear it will never happen again. I cannot face a case, please.”

Sergeant Sabina Yeasmin waves him away, and the relieved driver speeds away giddily.

Soon after, a motorcyclist who stopped his bike on a busy lane gets an earful from her.

“How dare you park your bike here? Don’t you even know the most basic traffic rules?” she shouts.

“Yes sir! But this was the first time,” he nervously offers, trying to win his way out with a toothy smile showing years of chewing betel leaves.

“You liar!” she rebukes him.

“No, no sir! It was the passenger. He wanted to stop here. He made me!” he pleads.

The traffic sergeant lets him go with a warning.

It has been 12 years since she started working as a traffic police. In her 30s now, Sabina shows up daily in uniform and cap for her eight-hour shift, with a bindi on her forehead as the only concession to fashion.

The local police box sits a little away from the major avenues. As several of her colleagues work inside, Sergeant Sabina says: “Truth be told, the lack of toilet facilities is what sticks out.”

Every day, she has to deal with over a hundred cases ranging from drunken and disorderly conduct to stopping brawls, people who need directions, and the ever present spectre of sexual harassment.

In the early days of her career, a lot of people refused to listen. But over time, she has learned to be tough. She claims gender discrimination is something she does not face now and is always treated as an equal.

“This uniform fascinated me as a child. Now, if I ever face any troubles, I can count on my colleagues to help. We work round the clock to make life better for civilians. We too have problems in our lives, and we can seldom address them,” she said.

Sergeant Panna works in the Tejgaon Industrial Area. Her day starts from 5:30am. She sets off for her duty station after preparing meals for her family and then goes to work.

“The work is challenging. There are a lot of issues including intense pollution and an acute shortage of toilets. The noise and air pollution are insufferable,” she said.

Panna confidently said that women are successfully working and moving forward in every sector, including policing the traffic.

She laments the lack of washrooms for female traffic police on her beat.

“We have to use washrooms at banks or shopping malls.

“We also do not have weekends. We cannot spend quality time with our families. We make sacrifices for the job, and even though we have gotten used to it, I wish things were better,” she said wistfully.

Sergeant Rosy, posted in Gulshan, said they have two shifts – morning and afternoon. The morning shift begins at 6:30am and the afternoon shift starts from 2:30pm.

She too spoke of the lack of a washroom and lack of a weekend holiday. “Those working at headquarters get the weekend off. We get 20 days of annual vacation, but a bit of rest on the weekend would do us good. We could spend more time with our families.

“A lot of people who violate traffic laws refuse to accept their punishment. We catch a lot of flak, but we are only trying to follow the rules and implement them,” she added.

He said: “It is embarrassing that people who wear our uniforms have to use unclean, unhealthy and unsafe toilet facilities. These people work through storms and scorching heat, stand for hours without reprieve. They work even when the rest of the country goes on vacation.”

But the spokesperson did not say what the police were doing to improve the situation.