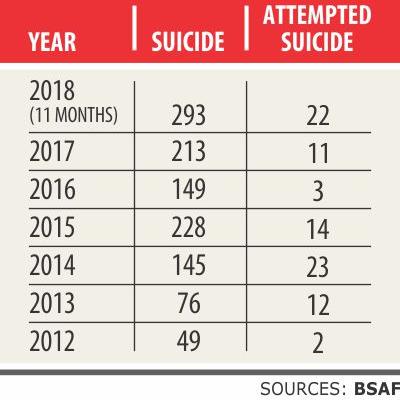 Replace punishment with counselling in schools

It is unfortunate that mental health issues among adolescents are not taken seriously until the adolescents are driven to take extreme steps like suicide. The death of Aritry Adhikary, a 9th grade student from Viqarunnesa Noon School and College, brought the issue of adolescent suicide into focus.

Aritry Adhikary was caught with a phone during an examination and accused of cheating. Then her father was called and insulted by the school’s teachers and principal, they also gave Aritry a transfer certificate. This lead her to commit suicide by hanging herself from the ceiling.

Some parents reported that it is common for the school’s teachers to misbehave with parents. In the name of discipline, the teachers often use strong and harsh language with students which can hamper their confidence at such a tender age. It is not surprising if a teenager carries this trauma into his/her adulthood. It can also affect their everyday lives.

Cheating in exams or engaging in any act of indiscipline is an offense, but a school should deal with indiscipline in a manner that does not hamper a child’s mental health. A school’s first priority must not be its ‘image’. Punitive measures and strict disciplinary actions should be replaced with counselling in all schools.

According to Bangladesh Shishu Adhikar Forum, 293 children committed suicide in Bangladesh, and 11 children attempted suicide. Only a few schools in Bangladesh have a certified psychiatrist to deal with the psychological needs of a student.