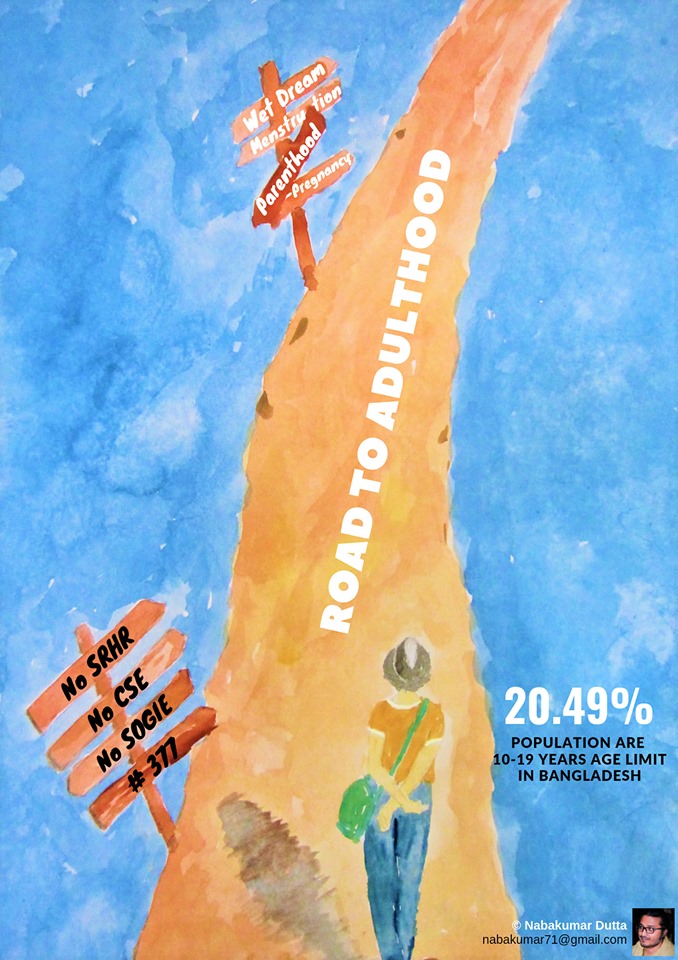 Starting life with Confusion and Frustration

Adolescent age is the most critical period of human life as an adolescent boy or girl steps into adulthood after a rough transitional journey through the entire period of adolescent age. It is called a rough journey because radical changes happen inside and outside of the body and mind in that period, and the adolescents have to go through immense struggle to cope with all the changes.

Why do the physical and mental changes occur during adolescence?

This is actually the inevitable part of human and any other animal’s growth and development cycle. However, dopamine modulation of prefrontal cortical interneurons changes during adolescence which control cognitive functionality (Kuei-Yuan Tseng, 2007). Heredity is one of influential factors behind the amount of changes in adolescent age (Americal Academy of Pediatrics, 2015). For example, tall parents may have tall children. Hormones control the physical growth and changes and cognitive, emotional and social changes are interlinked and influential to each other.

Physical changes of girls in adolescent age starts and ends early compared to the boy’s changes. Changes occur internally and externally in the body. Release of different hormones (i.e. growth hormones, thyroid hormones and androgynies) simultaneously triggers the growth of height and weight which is called ‘growth spurt’.

At beginning of puberty (around 9 year), girls’ body starts gaining fat and rounding shape, breasts start growing, vagina and uterus grow larger. However, in the beginning of boys’ puberty, testes and scrotum grow larger, and penis growth starts. Both experience growth in muscles, though boys reach the peak spurt around 15 years of age while girls achieve peak growth spurt at around 12 years. At around 11 years, pubic hair starts grow and around 12 years of age, boys experience first ejaculation and wet dreams and girls experience menarche (first menstrual period). At late pubertal stage, voice becomes lower for both sexes and boys gain facial hair.

Throughout the adolescent period, boys and girls have to go through an uncomfortable struggle for presenting self as adult. Physical growth spurt suddenly erases their child-like appearance. They suffer from identity crisis most of the time and seek for the best suited position among surrounding people. Hormonal changes reflect in mood swinging. Due to mood swing, in a very short period of time span, one may feel happy and irritated afterward.

According to Neo-Freudian psychological theory, in the phallic stage of development, adolescent boys experience Oedipus Complex and girls experience Electra Complex. This uncomfortable popup is thought to have sexual relation to parents of opposite sex pushes them to inferiority complex too. At the same time, since the sexual organs mature, adolescence feels sexual attraction to opposite or/and same sex person.
Lack of enough ability of logical explanation and weaker self defense mechanisms, adolescence seems to have less control over emotion. Most of them tend to go beyond parents’ advice and show anger, grief and extreme expression of all other emotional states. According to Freud’s Structural Model of psyche, adolescence is the time to develop id, ego and super ego, most of the adolescents fail to keep balance in this three major integrated part of personality (Snowden, 2006). Eventually, frustration grows among them.

Sexual risk-behavior becomes a common negative outcome of adolescent age. Sexual organs and emotion reach the peak of development in this span of life and at the same time, lack of proper information, lack of dependable and trustworthy person to share the feelings with, adolescents engage with risky sexual activities which results in complicated sexual and reproductive health. In addition, out of curiosity and peer-pressure adolescents try drug and substances and thus do harm to their physical wellbeing.

According to national census 2011 in Bangladesh, 20.49% of total population are of 10-19 years old age limit. Most of them do not have access to information regarding their sexual and reproductive health and rights (SRHR). Though there is policy i.e. Adolescent Reproductive Health Strategy 2005-2015, National Strategic Plan for HIV/AIDS 2011-2015, National Adolescent Reproductive Health Strategy, 2006 etc. state to make information accessible to adolescents, yet there is no option for unmarried adolescents having STI and/or regarding contraception. Still they depend on peers, unaccepted vulgar books or booklets, sometimes websites to avail information related to sexual and reproductive health. Since adolescent boys start believing in sexual myths related to penis size, duration of sexual intercourse, and other sexual matters, immediately they start comparing themselves and eventually fall in great depression. A good number of the adolescent boys end up with the so-called treatment of roadside healers. On the contrary, girls’ situation is much more fragile while they experience menarche. Period is viewed as a shameful and matter of highest secrecy. In most cases girls and women have to face numerous superstitions during period. For example, they are not allowed to have protein (meat, fish, egg, milk etc.), cannot perform religious rituals, cannot go out after evening and  they face many more bizarre challenges. However, most importantly, since this is a taboo and matter of shame, they cannot practice proper hygiene as well. All these contribute in harmful outcome of girls and women’s sexual and reproductive health. A considerable number of women and girls suffer from cervical cancer in Bangladesh. We could not build much awareness against breast cancer among girls and women since our culture is not that much open to touch and experience own body.

A safe and joyful adolescent period leads to safest adulthood. Adolescents must have access to information and services regarding their sexual and reproductive health to ensure a strong nation. Our laws and policies related to adolescent’s health and rights must be reviewed thoroughly.