Action Research The Incidence of Menstrual Regulation Procedures and Abortion in Bangladesh, 2014 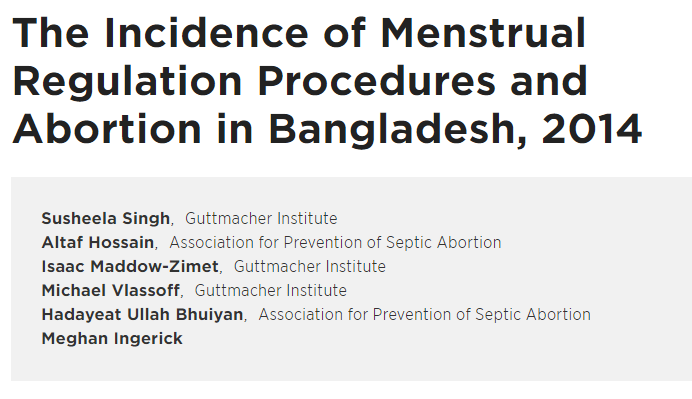 The Incidence of Menstrual Regulation Procedures and Abortion in Bangladesh, 2014

Menstrual regulation (MR) has been part of the Bangladesh family planning program since 1979. However, clandestine abortion remains a serious health problem in Bangladesh, and anecdotal reports indicate that clandestine use of misoprostol has increased since the most recent estimates (for 2010). Because of this, it is important to assess changes in the use of MR services and the incidence of clandestine abortion since 2010.

A survey of a nationally representative sample of 829 health facilities that provide MR or postabortion care services and a survey of 322 professionals knowledgeable about these services were conducted in 2014. Direct and indirect methods were applied to calculate the incidence of MR and induced abortion.

Given declines in MR provision, more attention needs to be paid to building capacity, including hiring and training more providers of MR. Harm-reduction approaches should be pursued to increase the safety of clandestine use of misoprostol in Bangladesh.