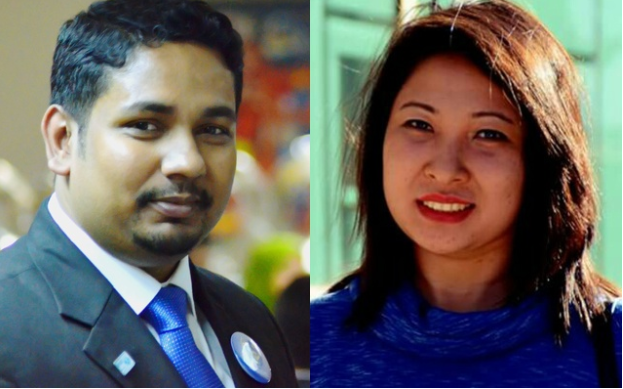 Two Bangladesh nationals — Towfique Ahmad Khan and Ukhengching Marma — are among 17 finalists drawn from 13 countries for the 2017 Commonwealth Youth Awards, according to a statement issued by the Commonwealth.

Towfique (left) is a social entrepreneur who founded the South Asian Society and launched the ‘Girls for Global Goals’ campaign.
His work has empowered 600 young girls with knowledge about the Sustainable Development Goals, which also led to 4,500 volunteers organising over 500 programmes and projects and promoted the campaign ‘Know your SDGs’ to raise awareness and reached out to 42,000 young people.
Ukhengching (right), on the other hand, runs the Menstruation Hygiene Campaign an intervention programme aimed at empowering indigenous adolescent girls to live healthier lives. She has been able to reach out to around 700 girls to raise awareness about sexual and reproductive health and rights.
This year’s group of finalists are recognised for spearheading projects that will contribute to the Sustainable Development Goals – a set of 17 global targets that governments have committed to achieve by 2030.

Seventeen young changemakers from 13 countries are in the running to be named “Commonwealth Young Person of the Year” at an awards ceremony on March 15 alongside regional young persons of the year for Asia, the Pacific, the Caribbean and Americas, Africa and Europe.