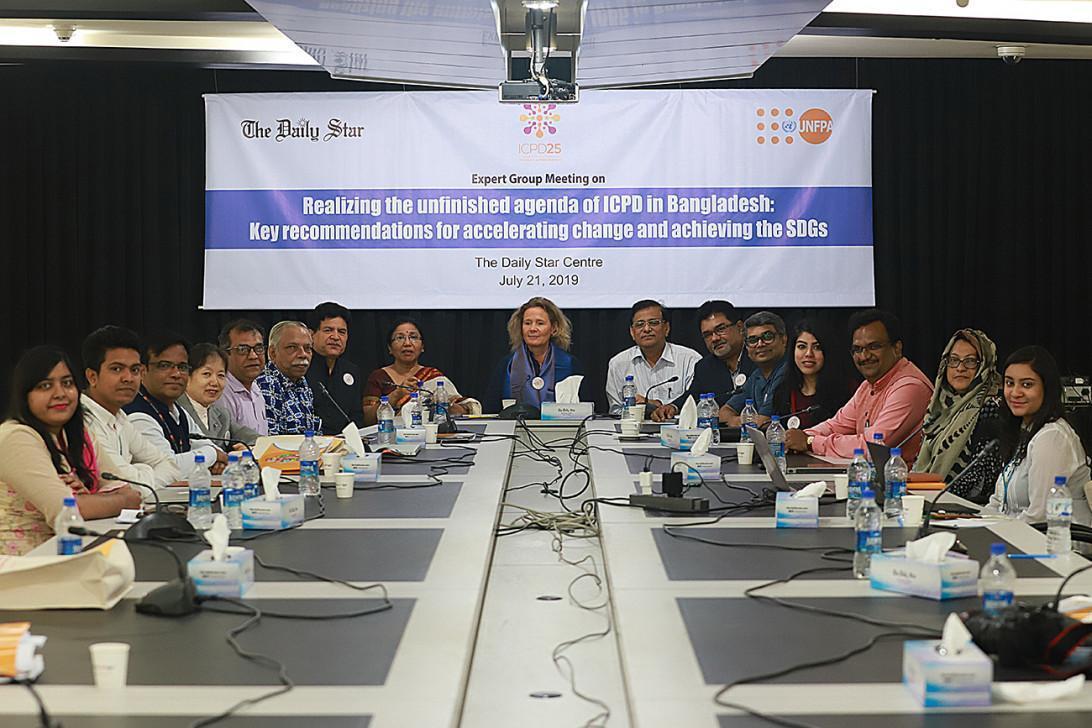 UNFPA Roundtable: Realising the unfinished agenda of ICPD in Bangladesh

The Daily Star and United Nations Population Fund (UNFPA) in Bangladesh jointly organised an Expert Group Meeting titled “Realising the unfinished agenda of ICPD in Bangladesh: Key recommendations for accelerating change and achieving SDGs” on July 21, 2019. A summary of the discussion has been published by The Daily Star.

The 25th anniversary of the ICPD (International Conference on Population and Development) is a momentous occasion to assess what Bangladesh has done so far and what we need to do for the future regarding population issues. It seems that earlier, we were very intense on population-related issues and achieved remarkable success, but now we have become a bit more relaxed about it.

Population can be both a burden and an asset. A big population can do wonders, but there needs to be a balance between population numbers and the ecology that supports it. In Bangladesh, we are currently experiencing a population density problem. Quantitative assessments have shown that there is reason for genuine concern at the number of people we can healthily sustain. Qualitative evaluations have revealed our shortcomings in different key population-related issues such as skills, education, health services, human rights, youth unemployment, violence against women and labour wages. Hence, population issues should be placed at the core of our planning process. We need to look at population with all its challenges and prospects and move beyond focusing on how to control it.

As spoken by Dr Asa Torkelsson, Country Representative, UNFPA Bangladesh at the roundtable –

The ICPD meeting and Programme of Action taken in Cairo in 1994 brought a shift from viewing population in the sense of control to allow people to make their own reproductive choices. At that very moment, we identified the agenda and the ambitious plans needed in terms of maternal health, family planning, and addressing gender-based violence. This year we have the opportunity to see, worldwide, how well we have done against the goals we set, and what more needs to be done. I believe our upcoming ICPD+25 meeting in Nairobi will be an opportunity to re-energise global commitment towards the unfinished agenda and achieve Agenda 2.

ICPD’s vision is well-reflected across the Sustainable Development Goals (SDGs) as an accelerator to leaving no one behind. We hope there will be several pre-conference meetings for the Nairobi Summit where world leaders and governments and other parties will meet to come up with new commitments for the remainder of the time. We have the high-level political forum (HLPF) in September to galvanise support for ICPD. The HLPF will meet under the auspices of the UN General Assembly at the level of heads of state and government to follow up and review progress in the implementation of the 2030 Agenda and the 17 SDGs. This will also mobilise further support for action to achieve them.

According to Dr. Mainul Islam, Chairperson and Project Director, Department of Population Sciences, University of Dhaka –

In the last 25 years since the ICPD meeting, Bangladesh has made substantial progress in several key areas such as economic growth, poverty reduction, gender parity in primary school, under-five mortality reduction and gains in life expectancy at birth. In terms of Total Fertility Rate (TFR), the rate has decreased from 3.4 children per woman in 1994 to 2.3 children per woman in 2014. However, challenges persist due to some regional variations in TFR and the use of contraception.

Among the major challenges, child marriage is on the top, which is adversely affecting employment, education, decision-making and overall empowerment of women and girls. Early pregnancy and adolescent fertility rate is at 31 percent (BDHS, 2014), compared to 33 percent in 1994, which implies that we have not progressed much in this aspect. Unmet needs for family planning among women aged between 15 to 19 stand at 17 percent, which is quite high. Prevalence of partner violence in marriages is 80.2 percent compared to 87.2 percent in 2011, which does not imply a significant reduction. The percentage of skilled birth attendants has increased (42.1 percent in 2014), but maternal mortality ratio is still high which need to be reduced from its current level of 176 (UNFPA SWOP) to 70 per 100,000 live births to meet the SDGs. Our demographic trends are more diverse with a large youth population and an increasingly ageing population. Youth unemployment rate (11 percent) for people aged 15-29 has doubled since 1994. Half of the Not in Education, Employment or Training (NEET) group consists of women.

Rapid urbanisation is happening in Bangladesh (35.9 percent in 2017). However, it is bringing adverse effects in terms of population mobility and displacement, which in turn are hampering health, housing and transport. Migrants, particularly women in urban areas, are facing numerous challenges in terms of sexual and reproductive health issues. We have good policies, but we need to consider whether these policies are connected with the SDGs and aligned with the ICPD framework.

Session 1: Leaving no one behind: Key catalysts for Bangladesh to achieve SDGs

Recommendations from the discussions were following:

Read more from the source: The Daily Star