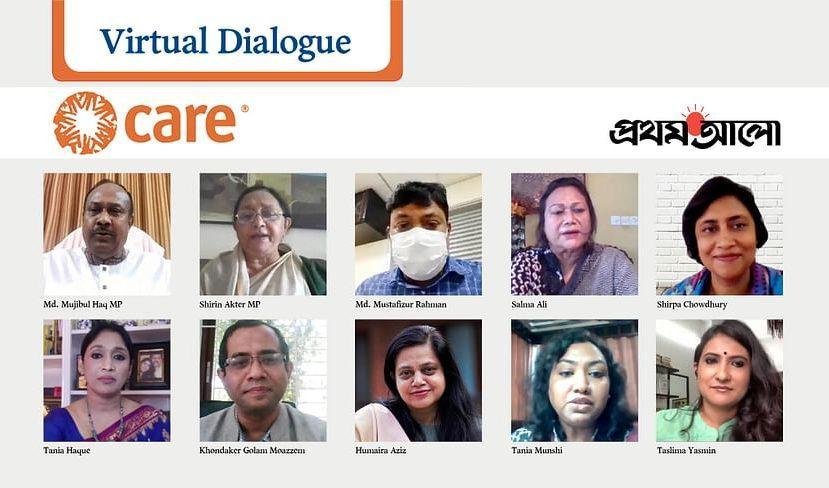 Workplaces free of harassment must be created for women. Bangladesh must ratify and implement the ILO Convention 190 as soon as possible in order to identify the issues of harassment and violence at the workplace and improve the work environment. These observations were made on Monday at a virtual dialogue on ‘Harassment-free workplace for women and ILO Convention 190’ arranged by CARE Bangladesh’s Promoting Worker Well-Being Project. The virtual dialogue was moderated by Prothom Alo assistant editor Firoz Choudhury.

In the opening presentation, team leader of CARE Bangladesh’s Promoting Worker Wellbeing Project, Babul Azad, said 20 million (2 crore) of the 63.5 million (6.35 crore) workers, that is 32 per cent, were women. While, among South Asian countries, Bangladesh had made considerable progress in female education, women in politics and maternal mortality rates, harassment in the workplace continued unabated.

The participants of the dialogue affirmed that the Labour Act, 2006 needed to be amended and new clauses added in order to prevent violence and harassment of women at the workplace.

The ILO Convention was adopted in order to take legal measures aimed at improving work environment by identifying and addressing violence and harassment in the work place. Bangladesh has still not ratified the convention adopted in June 2019 at the ILO conference.

‘Those who mistreated and harassed workers in the factories, did not spare a thought about the feelings, rights and dignity of those workers’- Shireen Akhter MP

Chairman of the parliamentary standing committee of the labour and employment minister Md Mujibul Haque, member of parliament Shireen Akhter, Joint inspector general of the Department for Inspection of Factories and Establishment (DIFE) Md Mustafizur Rahman, President of Bangladesh National Women Lawyers Association (BNWLA) Salma Ali were present and gave valuable opinions in support of the ratification at the online dialogue.

Senior research fellow of the Centre for Policy Dialogue (CPD) Khandakar Golam Moazzem said that the government should immediately ratify ILO Convention 190 without any hesitation. Caution should also be taken so that amendment of the law does not create any new loopholes in related laws.

Professor of Dhaka University’s department of women and gender studies Tania Haque mentioned that there is need for gender sensitivity training at the factories. Women are being harassed in various ways based on their age and marital status.

Presenting the keynote speech at the event, associate professor at the Dhaka University law department, Taslima Yasmin said Section 332 of the labour law mentions ‘indecent and unmannerly’ behaviour with women, but this is not gender sensitive. It does not clarify harassment and violence against women in the workplace. The maximum sentence in the law is also inadequate, just a Tk 25,000 fine. This should be increased.

Labour leader and founder of Awaj Foundation, Nazma Akter, said harassment of women in the factories has increased during COVID-19. She said many women had to leave their jobs in the absence of daycare facilities. She said if women workers were healthy and could work without any fear lurking in their minds, this would be good for the economy of the country.

Training and gender officer of ILO’s Better Work Project, Shipra Chowdhury, said that concerted efforts were needed to devise ways of identifying and preventing harassment and violence in the factories.

Director of the garments manufacturer Sepal Group, Tania Munshi, said there was zero tolerance towards violence against women and harassment at her factory and they had formed an anti-sexual harassment committee to this end. Garments factory workers were also more conscious than before, she said.