News Why Feminism Is NOT the Same as Misandry 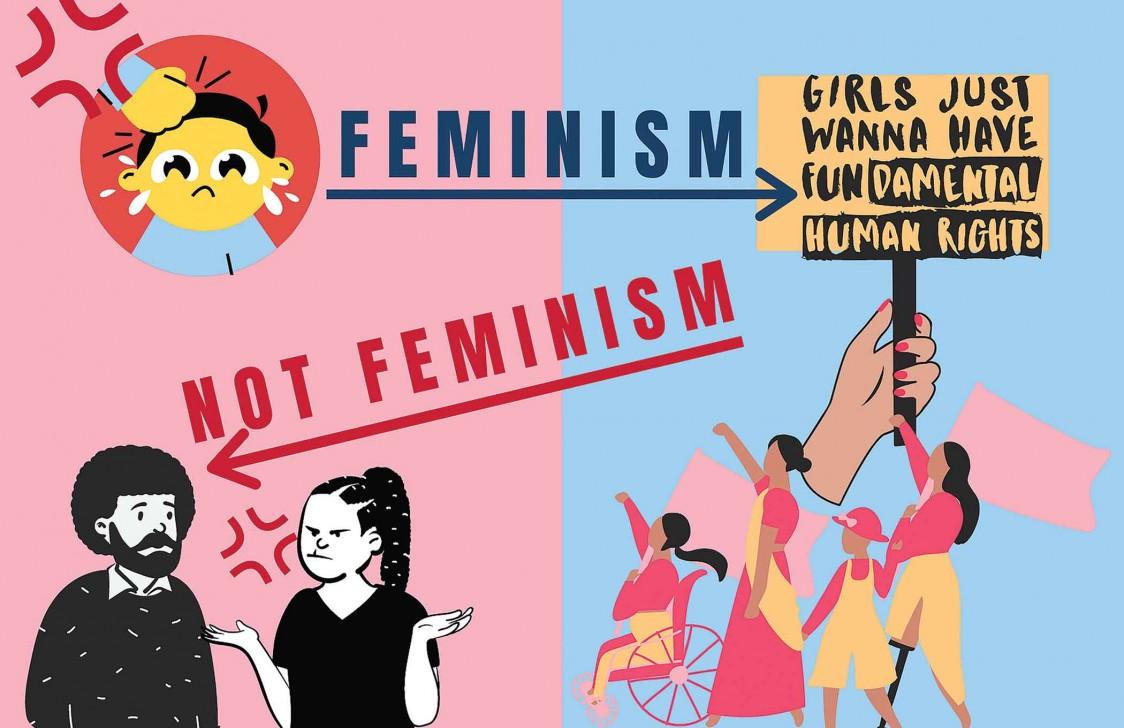 Why Feminism Is NOT the Same as Misandry

“She is a feminist – a man hater,” an acquaintance says while talking about a certain person. I look at him, bewildered and at a loss, but then I remember the countless times I have seen teachers in school, random people on social media, friends and even family members confuse feminism with misandry or man hating.

This confusion has become one of the many reasons the word “feminism” is feared and looked down upon across the world, sometimes even by people who have worked for women’s rights all their lives.

It is painful to note that feminism, a movement that seeks to free people from the shackles of patriarchy, is misinterpreted in this way. Wondering why this keeps happening, I approach Tahmina Huq, a Bangladeshi women’s rights activist. “One of the reasons people make this mistake,” she tells me, “is rooted in the fact that feminism challenges gender norms. Because it aims to establish a world in which everyone will enjoy equal rights regardless of gender, people who benefit from patriarchy are reluctant to support the movement and end up confusing it with misandry. Some people even think that feminists, instead of demanding equality, want a social structure in which men will be suppressed by women.”

Unlike what many people might think, feminists do not intend to establish female dominance and subjugate men. The aim of the movement is to erase patriarchy, an oppressive social system that has shackled and oppressed women, men refusing to conform to gender norms and anyone else who has dared to oppose it, for millennia.

A question may arise: if feminism is anti-patriarchy and not anti-men, why is it that feminists so often tend to criticise men and their actions?

The answer to this is simple. As patriarchy automatically places men in a position that is superior to that of women, innumerable men have oppressed women from time immemorial, knowingly or unknowingly, creating barriers and obstacles on their paths to success. Because patriarchy and the actions of so many men (towards women and men refusing to abide by toxic gender roles) are often interlinked, it is difficult to not criticise certain men while criticising the social system in question.

The fact that feminists criticise the patriarchal social structure – and everything it has imposed on women – is something that does not sit well with many people. It is not uncommon to see people wondering why women need to be so “aggressive” when they raise their voices against, say, social injustice. When it comes to activism, women are expected to mince words and respect the rules that gender roles have placed on them. Rage is something that is not considered “feminine” and therefore, when women choose to indignantly talk about, among other things, the violence inflicted by numerous men on women, the accusations of misandry once again enter the picture.

Because they confuse feminism with misandry, many people who would otherwise support equality refuse to associate themselves with the movement.

“It is strange that many people, in spite of believing that all humans deserve equal rights, tend to have reservations about feminism,” Tahmina Huq tells me. “We need to explain what feminism is to people from all walks of life. We need to make them aware of the fact that we still have miles to go when it comes to building an equal society. They need to understand why they have to take a stand against injustice and discrimination.”

Antara Farnaz Khan, co-founder of Oroddho Foundation, a non-profit organisation working on issues like gender discrimination and sexual violence, says, “While it is important that we engage in dialogue and make people understand what feminism truly means in order to dispel rumours of misandry, it is equally important to make sure we do not tailor the movement and make compromises according to the comfort level of those it wasn’t designed for.”

When I ask her how young feminists should, in spite of the accusations attached to the social movement, continue with their activism, she says, “My advice for young feminists is that they should not be afraid of standing by what they believe in just because it might make them seem radical. And they should always remember that the social capital that is lost for being a feminist is not something that is worth having.”

We need to remember that while talking about human rights, it is important that we address the suffering patriarchy continues to cause. It is for the eradication of this suffering that we need feminism. Misandry or man-hating has nothing to do with it.