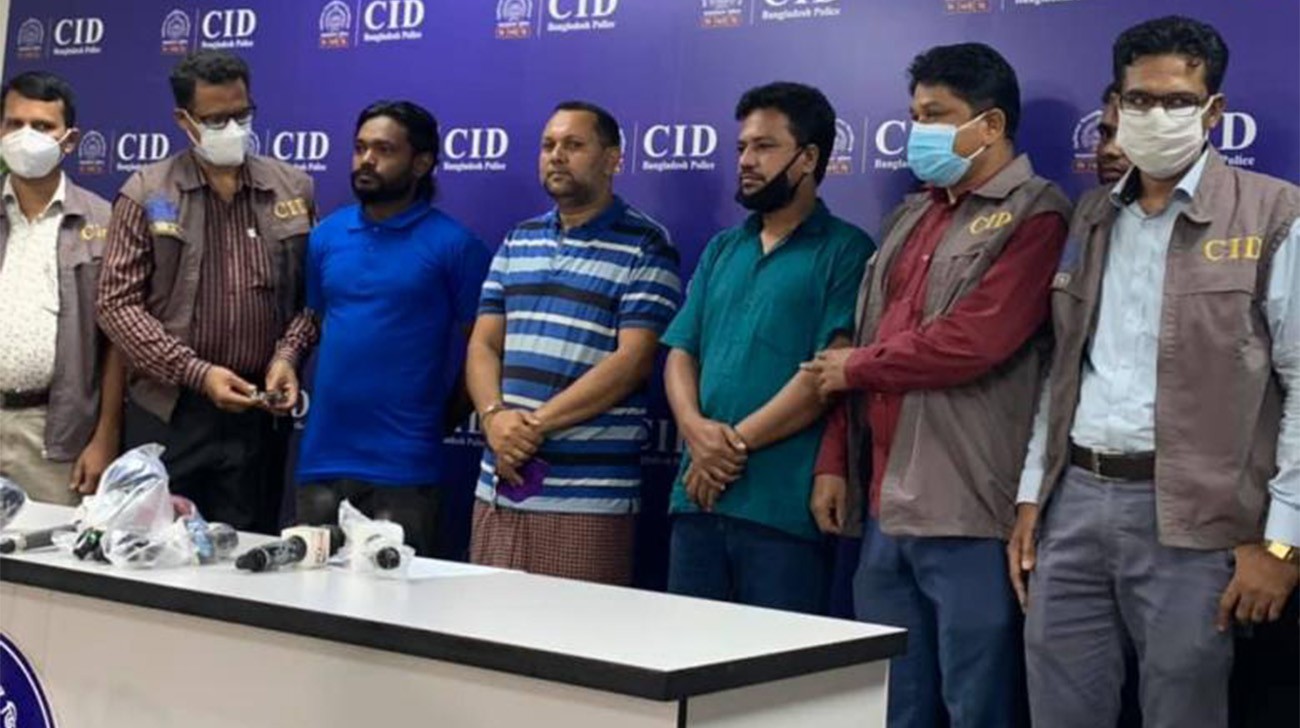 CID claims to have arrested the ring leader, two associates

The Criminal Investigation Department yesterday claimed to have arrested the ringleader and two members of a syndicate that has been trafficking thousands of girls and forcing them into sex work.

The arrestees are Md Azam Khan, 45, the “godfather”, and his associates Anowar Hossain Moyna, 50, and Alamin Hossain alias Diamond, 35.

Imtiaz Ahmed, deputy inspector general of the CID, disclosed the arrests while addressing reporters yesterday. He, however, would not divulge the time and place of the arrests.

Azam and those who worked for him would lure in girls aged 18-20 saying they would be provided with good jobs in Dubai.

They would never take money from the girls for travel and would instead pay them Tk 20,000-30,000 as advance salary.

Once the girls would reach Dubai, they would first be given jobs as receptionists or waitresses at three- or four-star hotels. A few days later, they would be forced to work at dance clubs and then as sex workers.

The girls would be tortured with electric shocks if they refused.

“After coming to Bangladesh, Azam was trying to manage another passport to leave the country. On information, the CID arrested him with two associates,” he said.

DIG Imtiaz said Azam has around 50 brokers in different districts of the country.

The brokers would lure girls with the hopes of a job that would pay Tk 50,000 thousand per month, he said.

Once the girls would agree, Azam took support from some agencies and managed tourist visas for these girls and would send them to Dubai in cooperation with two foreign airlines, he added.

“We have found the involvement of two airlines company that would take these girls out of the country,” the DIG said.

Without disclosing the names of the airlines, he further said they are investigating the roles of those and the recruiting agencies.

The brokers would get Tk 10,000 for managing each girl, said DIG Imtiaz.

About the syndicate, he said they have come to know that Azam’s two brothers are in Dubai and they also help him operate the syndicate.

“Besides, we have also found the involvement of two Indian and several Pakistani nationals,” he said.

“We often face problem to investigate transitional crimes as the accused are found to be staying in different countries,” he said.

Azam, from Chattogram’s Fatikchhari, was wanted in 15 separate cases, including six for murder, said the CID.

“He went to Dubai in 1996 and has been running the syndicate for eight years. We also heard that he was once arrested by Dubai police and was in jail there for a month,” said Imtiaz.

About the victims, he said they have found hundreds of voice recording of the young girls begging to be released and sent back home.

The Daily Star collected some audio recordings of the victims.

In one of them, a victim was heard pleading: “Please, send me back. Do not extend my visa. I am begging you. My mother is sick.”

The CID official said, “We are suspecting the victims may file cases with different police stations in the country. We are now looking for the cases, and he would be shown arrested in phases.”

A case was already filed against Azam with Lalbagh Police Station on July 2 and two victims gave confessional statements against him in court.

The CID also investigating into the wealth of Azam, and a money laundering case would be filed against him soon, he said.

A high official of CID, requesting anonymity, said he is one of the top financial donors of a political party and also collected nomination forms in last national election from Chattogram-2 constituency from the party.

DIG Imtiaz said that they found a political background but they do not want to disclose details as the investigation is still in the primary stage.